The proton pump inhibitors use and gastric cancer development: is it a real association?

Gastric cancer (GC) is well known as one of the most common malignancies worldwide. It is the second cause of death with at least 738,000 deaths annually (1) and according to the International agency of research on cancer, this type of cancer is still the fifth most common cancer overall, particularly in developing countries which represents more than 50% of the new cases (2). In the case of developed countries, the incidence of GC originating from the cardia follows the distribution of esophageal cancer. Noncardiac gastric adenocarcinoma has marked geographic variation, with countries such as Korea which has the highest incidence of GC in the world. On overage, 41.8 people out of every 100,000 will develop this disease in their lifetime. Mongolia has the second highest rate of GC and Japan is next on this list with a prevalence rate of 29.9 out of 100,000 (3).

Despite substantial differences in GC world distribution, common risk factors have been identified, for example the incidence rates are about twice as high in men as in women without variations in relation to the country (2). Along with gender there are others risk factors that combine genetic alterations and environmental characteristics like age, dietary habits, alcohol consumption, overweight and tobacco smoking (Figure 1). It has been shown that the risk of GC is increased by 60% in male and 20% in female smokers compared to nonsmokers (1,2). Furthermore, the Helicobacter pylori infection (HPI) currently is considered a major risk factor for GC. Fortunately, it is a partially preventable disease (4). Moreover, this condition occurs worldwide placing it as a significant cause of GC. Only in China the prevalence of Helicobacter pylori (H. pylori) has been reported around 83% (5,6) (Table 1). 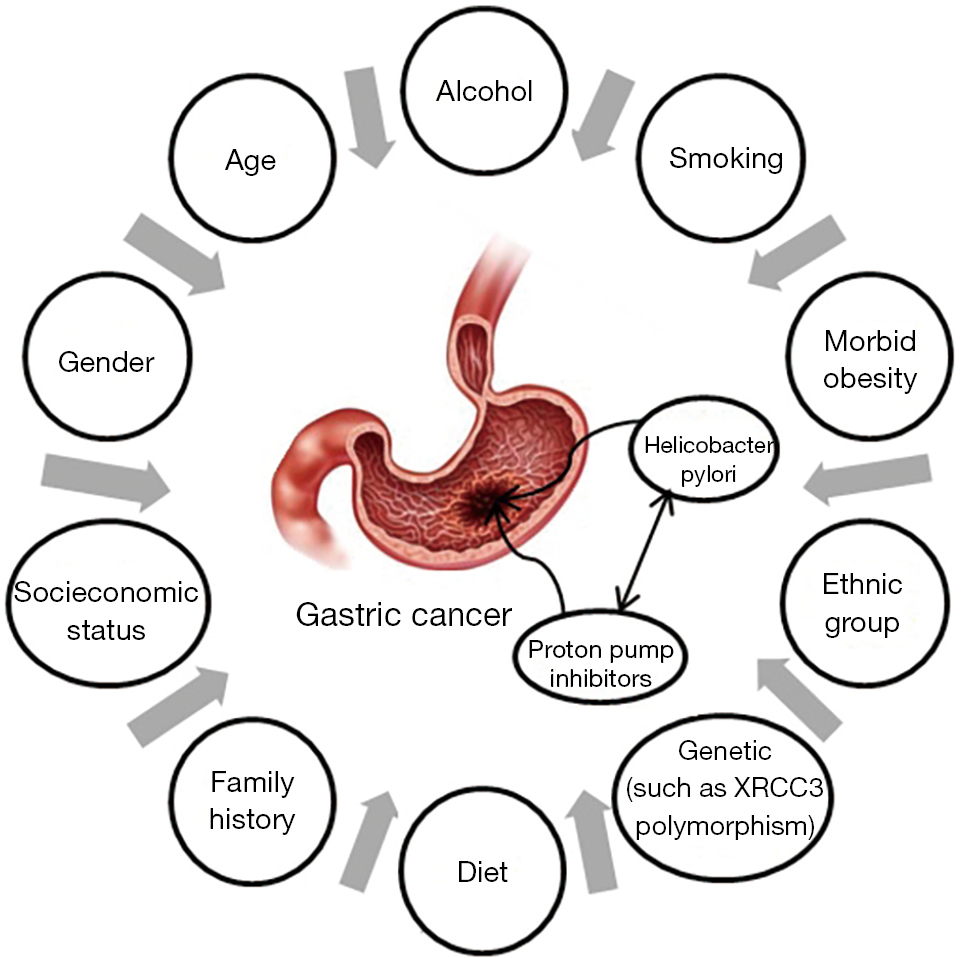 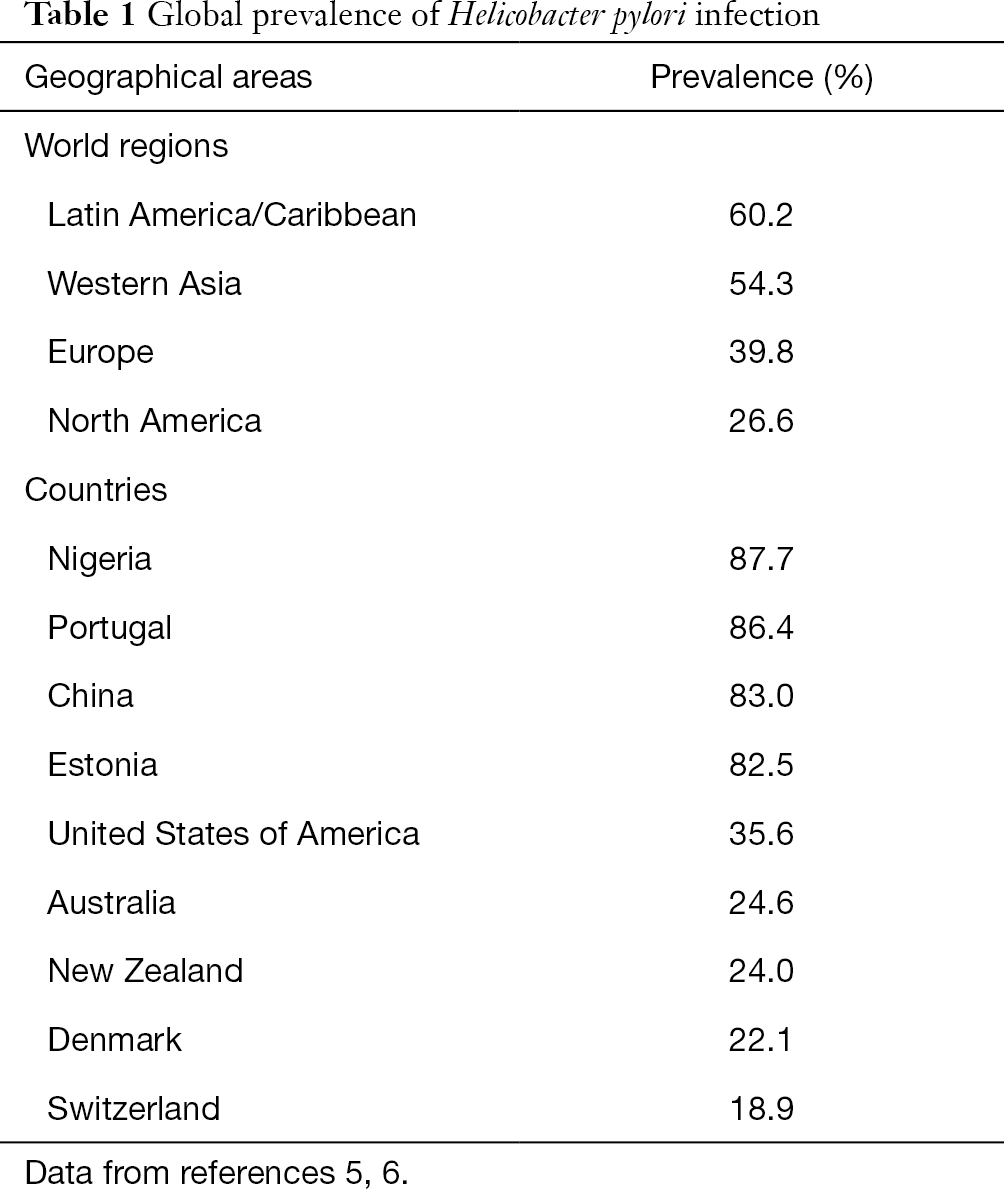 In order to understand why HPI represents a major risk factor for the development of GC. The H. Pylori model explains how this bacterium leads to chronic inflammation through its toxin (BabA, CagA and VacA) damaging epithelial cells which may result in atrophy and metaplastic epithelia (7). Additionally, it has been recognized that H. Pylori produces genotoxic molecules which can cause double-stranded DNA breakage and aberrant gene expression, an example of this, is the production of reactive oxygen species as part of the immune response of host cells against HPI, such as nitric oxide radicals that damages chromosomal DNA (7).

On the other hand, primary prevention for GC is eradicate HPI (1) by using different treatment schemes. At present, the first-line treatment is triple therapy consisting of a proton pump inhibitors (PPIs), clarithromycin, and amoxicillin or metronidazole for 14 days considering this in regions where H. Pylori clarithromycin resistance is known to be <15% and in patients with no previous history of macrolide exposure for any reason (8).

In addition to the antibiotic therapy the PPI’s use revolutionized the management of acid-related diseases which includes HPI and there has always been strong evidence supporting their superior efficacy and overall safety profile. Regardless of the previous data, now several studies have shown evidence for the potential harms of PPIs. In a review by Haastrup et al. (9), concerns about possible side effects related to long-term use of PPI’s have been raised in terms of infections, impaired absorption of nutrients, dementia, spontaneous bacterial peritonitis and the risk of hepatic encephalopathy during hospitalization in cirrhotic patients (10).

Several previous studies have been proved the relation between PPI’s use and GC (11-13). The use of those drugs as a risk factor to develop GC comes from the basis that in patients with HPI, the acid-suppressive maintenance therapy intensifies the inflammation response increasing the speed of atrophic changes of the gastric mucosa (11). Moreover, a recent study suggests that PPIs induces hypergastrinemia which leads to hyperplasia of enterochromaffin-like cells (12). Although, is still debatable the potential risk of PPIs on GC.

In a recent study, Cheung et al. (14), reported the associations between long term use of PPI’s and GC development after HPI therapy. Those researches conducted a retrospective population-based study that included 63,397 subjects, aged 18 years or above and had been prescribed a minimum of 7-day course of clarithromycin-based triple therapy for HPI in outpatient clinics. The medical treatment chosen was according to the antibiotic resistance. In China the clarithromycin resistance increased from 14.8% in 2002 to 52.6% to 2014 (5). In addition, the eradication of H. Pylori at the time of GC diagnosis was demonstrated by biopsy. HPI was diagnosed by either upper endoscopy with biopsy-based tests or urea breath test in clinical practice. Among all patients, 153 (0.24%) developed GC during a median follow-up of 7.6 years. PPI’s use was associated with an increased GC risk [hazard ratio (HR) 2.44, 95% confidence interval (CI): 1.42–4.20], while histamine-2 receptor antagonist (H2RA), a negative control exposure was not. The risk increased with duration of PPIs use (HR 5.04, 95% CI: 1.23–20.61; HR 6.65, 95% CI: 1.62–27.26 and HR 8.34, 95% CI: 2.02–34.41 for ≥1 year, ≥2 years and ≥3 years, respectively). In relation with GC characteristics, the most were in the noncardia.

We believed that this is a very important study for the following reasons: firstly, the sample size of the study which includes patients from all Hong Kong and also it is a multicentric-type study. Secondly, the diagnostic tools that the investigators used were the gold standard. Thirdly, the very well definition of GC diagnosis and the follow-up of patients.

On the other hand, although authors point out in the discussion section that one of the major limitations of this study is the lack of information of some other risk factors (age, diet, family history and socioeconomic status) in many cases were not included in the database, only those patients with major complications of heavy alcohol consumption, smoking and morbid obesity.

In summary, this study provides very important information that support the relation between GC and the long-term use of PPIs. Future studies carried out in different geographical areas are mandatory to validate these results in other ethnic groups where the HPI is lower compared with Asian countries. Also, it is important to take in count other factors considered previously as risk for GC development.

This study was supported in part by a grant from Medica Sur Clinic & Foundation.