Erectile dysfunction (ED) is one of the commonest pathologies affecting the middle-aged men, with a negative impact on the quality of life. Around 30% of male patients above 40 years suffer from this condition, with increasing rates in older ages (1). Besides the great developments in this field, regarding both pathophysiology and treatment, some patients still lack the satisfactory response to the available treatments. These include: oral drugs [5-phosphodiesterase inhibitors (PDE5-I) both in daily regimen (tadalafil 5 mg) and on demand regimen (all the products commercially available)]; intra-urethral and intra-cavernous alprostadil (on demand regimen); vacuum devices; and penile prosthetic implant. All the approved treatments are unable to alter the underlying pathologic process, and achieve a “cure” for this problem (2). On the other hand, non-responders lack an effective therapeutic weapon, remaining the penile prosthesis as the unique, but irreversible, solution.

In the last years, some innovative options appeared in order to face this problem, and some studies have shown good results with the use of low-intensity extracorporeal shockwave therapy (Li-ESWT) in the corpora cavernosa.

Acknowledging that the reduction in the blood flow in the cavernosal arteries and the endothelial dysfunction are the hallmarks of ED, Vardi and colleagues (3) were the first to study this subject in 2010. Expertise obtained in other medical fields (mainly Cardiology, Plastic surgery and Orthopaedics, that used the same technology to treat myocardial infarction, skin wounds and bone fractures, respectively), this group hypothesized that the neovascularization could improve the cavernosal blood flow. Since then, many studies and clinical trials have been published in this topic. Recently, the European Urological Association has listed Li-ESWT as a possible treatment for ED. Nevertheless, however there isn’t a consensus about the efficacy of this tool in the ED setting, the type of schedule nor in which patients the benefit could be maximized (4).

The present study aims to determine the impact and efficacy of Li-EWST in male patients with ED.

The present study is a single-center, pilot clinical study to evaluate the efficacy and safety of Li-EWST.

A total of 18 adult men with ED, who met the inclusion criteria, were enrolled in this study. The Li-EWST protocol was applied between January and December 2016 by the same urologist.

Inclusion criteria were: age >18 years, history of ED with duration of at least 12 months, without good results with the use of PDE5-I (either non-responders, unsatisfied with the regimen, or with formal contra-indication).

Men were provided with verbal information with regard to the study protocol and gave their written informed consent. The Institutional Review Board at the Centro Hospitalar Vila Nova de Gaia/Espinho approved this study.

Participants underwent a standard assessment that included medical history, physical examination and blood testing. Data was also collected for comorbidities (diabetes mellitus, arterial hypertension, tobacco abuse) and past experience with any ED treatment. A self-administered symptoms questionnaire [International Index for Erectile Function short form (IIEF-5), validated for the Portuguese language (5)] was used. No other treatment for ED was allowed during treatment. In subjects previously treated for ED, a 4-week washout period was implemented.

Treatments were carried out using a handheld Duolith® SD1 machine (Storz, Tägerwilen, Switzerland) set at 0.15 mJ/mm2, 5 Hz, with a total of 3,000 impulses. Li-ESWT was performed in six positions on the penis (penile shaft proximally and distally at right and left corpora cavernosa, right crus and left crus) and given by a urologist.

After the treatment each participant was asked about the effects and side-effects.

The study protocol was similar to other presented by two other studies (6,7), in which the same equipment was used.

The treatment was expectably painless, not requiring any anaesthetic procedure or analgesic medication. Each session lasted approximately 30 minutes, and was conducted in an outpatient basis.

The primary outcome measure was the change in IIEF-5 score from baseline to after 1 and 3 months. Changes in IIEF-5 score of at least 4 points were considered clinically relevant (8,9). Secondarily, we assessed the clinical impact of the treatment by using, at 1- and 3-months, both the Sexual Encounter Profile (SEP) diaries (Questions 2 and 3)—SEP-Q2 “Were you able to insert your penis into your partner’s vagina?” and SEP-Q3 “Did your erection last long enough for you to have successful intercourse?” and the Global Assessment Question (GAQ) by answering the yes/no question: (GAQ-Q1) “Over the past four weeks has the treatment you have been taking improved your erectile function?”.

A descriptive analysis was performed, defining the baseline population characteristics and exploring the main results in the cohort. The IIEF-5 scores at baseline and at 1- and 3-month follow-up were compared using the McNemar’s test for a matched pairs analysis. Statistical analysis was performed by the program Statistical Package for Social Sciences, version 22.0 (SPSS Inc., Chicago, IL, USA). P values <0.05 were considered statistically significant.

Of the 18 men enrolled in the study, all completed the follow-up of 3 months. 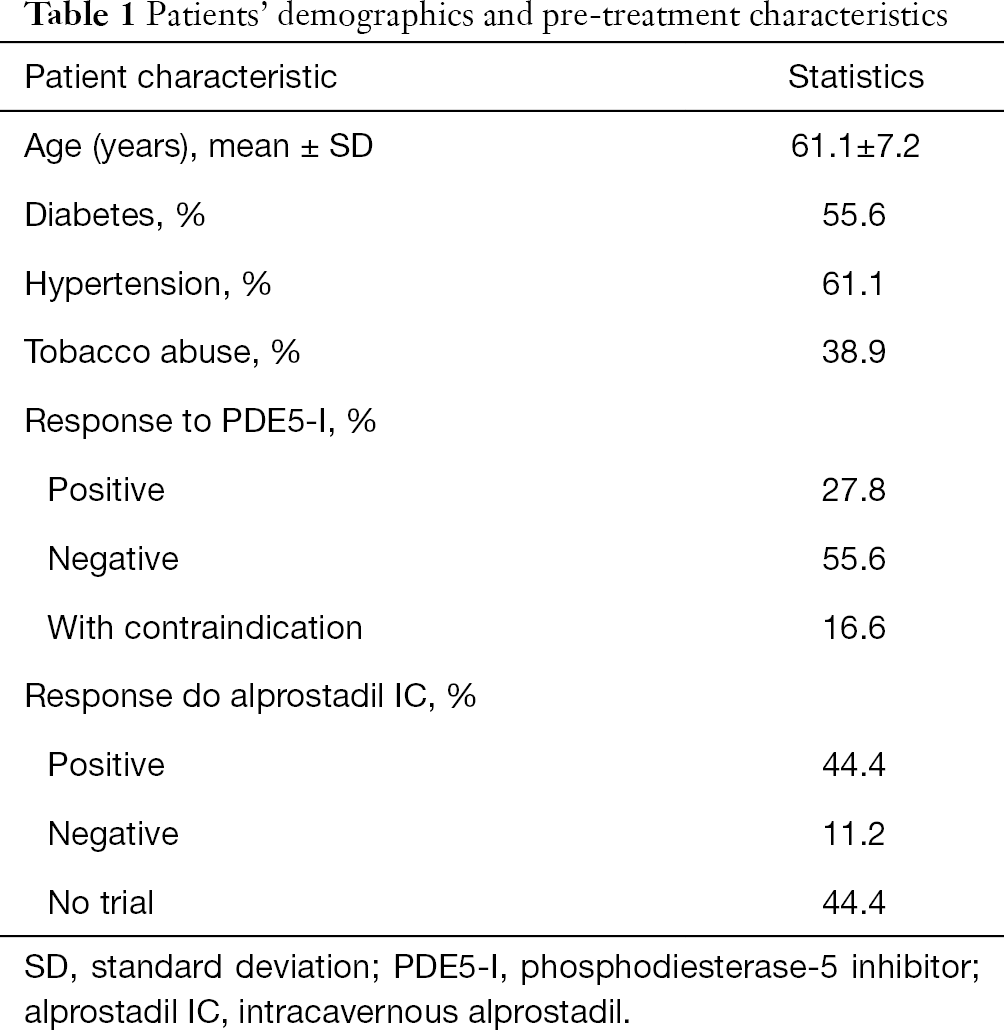 The Li-ESWT sessions took place 100% in outpatient basis. All patients were able to complete the scheduled treatment.

During treatment, 55% referred the appearance of “de novo” spontaneous erections.

Table 2 Analysis of self-reported measures at baseline, 1- and 3-month follow up by treatment cohort
Full table

No patients described any discomfort or negative side effect from the treatment.

Li-ESWT has already proven its efficacy in different settings, mainly in cardiology (10), plastic surgery (11) and orthopaedics (12).

Several mechanisms have been purposed to explain the benefit from the shockwave on the penile haemodynamics. Studies have shown that shockwaves, through the creation of microbubbles in the vasculature, can cause disruption of the endothelium (13), and subsequently, a cascade of reactions contribute to an improved setting for an erection to occur: activation and recruitment of stem cells; release of vascular endothelial growth factor (VEGF) (14) with consequent neoangiogenesis; increase in nitric oxide (NO) production through activation of the endothelial NO synthase (eNOS) and through direct effect of the shockwaves (15); neuronal repair through Schwann-cell proliferation and activation (16).

Some studies in the urologic field have shown some improvement in erectile function after Li-EWST (2,3,6-9,17-20), however systematic reviews (4,21-23), with or without meta-analysis were not able to provide level I evidence regarding the benefit of this technique on the improvement of erectile function.

The decision to include all severity of ED was made since there is not a consensus of which group of patients would benefit the most from this treatment—the systematic review from Lu and colleagues (21) revealed that patients with mild symptoms would benefit the most, while in the randomised controlled trial (RCT) from Yee and colleagues (24) the result was more beneficial towards the group with more severe disease.

After 1 month of treatment, there was no significant changes in the baseline IIEF-5. The same was observed after 3 months. This result is very different from the majority of published reports. In fact, other groups revealed increases in IIEF-5 score from 2.5–5 (26,27). The majority of groups used the erectile function questions of the IIEF (IIEF-EF) instead of IIEF-5, but the decision on using the IIEF-5 was made on the availability of the validated questionnaire translated in Portuguese language. Those groups have shown improvement in the IIEF-EF ranging from 2 to 9 (17,19,20,28), however the absolute value of variation is not comparable taking into account the different scale of both questionnaires.

Only 3 other published articles have shown absence of significant increase on the patient-reported.

In fact, Olsen (6) and colleagues, in their RCT, described benefit when comparing the Erection Hardness Score (EHS) at baseline to 5 weeks after treatment (57% vs. 9% of patients with EHS >2), however the study failed to prove an increase in the IIEF-5 score. The authors stressed the difficulties on the interpretation of the questionnaire from the patients.

Also Yee and colleagues (24), in another RCT, did not found any significative difference between the treatment arm and the placebo (variation of 5.3 points in IIEF-EF against baseline, but with non-statistically significant difference of 1.5 points against placebo, P=0.243).

More recently, Fojecki and colleagues (29), in 2017, published an RCT where they found an average increase in the IIEF-EF score of 1.5 points, and success in treatment in 38% of patients. However, both results were similar to the sham group and thus, no benefit from the treatment was considered.

Regarding the secondary outcomes of our study, namely the response from GAQ-Q1, interestingly, a better result was found. A high percentage (50%) of patients considered that their sexual function improved, even if there were no difference in the IIEF-5 score. This may be justified by the strong influence of a placebo effect. This positive effect did not last long in time, since at 3 months, the same value decreased to 33%. This concept of loss of effect over time was also described by other groups. Olsen and colleagues (6) have shown a decrease in the ratio of patients with EHS >2 from 57% (5 weeks) to 28% (24 weeks).

The small number of patients and the study design as a pilot study do not allow to formulate any conclusion that can be generalized. Since the study group has not shown any benefit from Li-ESWT we consider that the existence of a control group (a sham treatment group as performed by many groups), in this case, would not allow to make different conclusions.

The duration of follow-up is short, compared to some groups that presented 6- (3) or 12-month follow-up (18,20). Yamaçake and colleagues (18) presented that at 12 months there was still a significant improvement, however there was some contamination in the sham group, so conclusions should be taken cautiously.

The existence of different machines (five commercially available) (13), with different sources of energy to create the low-intensity shockwaves, doesn’t allow a direct comparison of results. The same applies to the possible difference between machines that produce focussed or linear shockwaves. And, although we tried to mimic the protocol made by a group with the same equipment (6), other groups are performing different protocols with the same equipment [with different number of sessions, number of shocks/session, energy density, total amount of energy, benefit of repeating the same protocol later (29)] so the actual power of this technology remains undefined.

Another limitation is the absence of an objective measure, such as haemodynamic values obtained in a penile Doppler ultrasound. In the context of ED, the burden of the placebo effect is not considered insignificant (13), so the use of only a subjective patient-reported outcome expressed through validated questionnaires may increase that problem. Some groups have included data on cavernous artery triplex ultrasonographic parameters, and if some described a significant positive change (30,31), others failed to show any significant change (18). However, it has been also stated that the changes in microcirculation might not be detectable by the cavernosal Doppler ultrasound.

The present study failed to show a difference in the IIEF-5 in patients with ED after a treatment with Li-ESWT.

The potential of Li-ESWT remains appealing, since the possibility of having a disease-modifying treatment for ED would be unique. However, because the effect of this technique on ED remains questionable, treatment of these patients with Li-ESWT should preferably be confined to clinical trials. In the future, rigorous RCTs will better show whether this therapeutic approach is truly effective and in which subset of patients.

Ethical Statement: The authors are accountable for all aspects of the work in ensuring that questions related to the accuracy or integrity of any part of the work are appropriately investigated and resolved. The Institutional Review Board at the Centro Hospitalar Vila Nova de Gaia/Espinho approved this study (No. 36/2016). All procedures performed in studies involving human participants were in accordance with the ethical standards of the institutional and/or national research committee and with the 1964 Helsinki declaration and its later amendments or comparable ethical standards. All patients provided written informed consent after explanation on the technique, expected and possible complications.