Does increased expression of glucocorticoid receptor support application of antagonists to this receptor for the treatment of castration resistant prostate cancer?

Although the physiological activities of androgens and glucocorticoids are diverse, GR and AR receptors are both members of the steroid nuclear-receptor superfamily. This is a family of ligand-activated transcription factors that are composed of an N-terminal domain, a DNA-binding domain (DBD), a hinge region, and a LBD. The steroid receptor DBD is a highly conserved and consists of two zinc finger motifs which recognize corresponding DNA hormone response elements (HREs). GR and AR not only share common structures but also have overlapping transcriptional targets including several classical androgen-regulated genes such as PSA and TMPRSS2 (2). In addition, glucocorticoids also can bind to AR with mutations in the LBD (L701H and T877A) driving AR signaling and tumor proliferation (3).

From a therapeutic standpoint, glucocorticoids such as prednisone are commonly used for the treatment of prostate cancer patients combined with chemotherapies or abiraterone for the following two main reasons. First, glucocorticoids suppress adrenal androgen synthesis through a negative feedback on the pituitary gland, which result in decreased serum PSA levels in CRPC patients treated with prednisone or dexamethasone alone in clinical studies (4,5). Second, they also have anti-inflammatory properties and ability to treat pain, nausea, and edema so that glucocorticoids have been incorporated into treatment regimens for CRPC to manage symptoms and adverse events. Abiraterone, a CYP17a inhibitor, requires combination with prednisone to suppress adrenocorticotropic hormone and mineralocorticoid excess-related side effects (6). To validate the effect of GR inhibition in CRPC patients, a clinical trial with combination therapy of enzalutamide and mifepristone (RU-486) is currently ongoing (NCT02012296). However, a previous clinical study also showed that mifepristone resulted in an increase in serum adrenal androgens and dihydrotestosterone levels in CRPC patients possibly due to a feedback increase in pituitary adrenocorticotropic hormone production, which might compromise the efficacy of mifepristone (7).

The known clinical benefits of glucocorticoids appear to contradict recent speculation that increased expression of GR following exposure to AR blockade may be a resistance mechanism driving CRPC. Arora et al. demonstrated that induced levels of GR are associated with resistance to enzalutamide (8). These correlations have been used to support the premise that GR upregulation can bypass the AR pathway and contribute to resistance to hormone therapies. Understanding the role of GR might provide new insights into the development of next-generation therapies for CRPC.

To this end Puhr et al., investigate the role of inhibiting GR for improved antiandrogen therapy. First, they analyzed GR expression in tissues from hormone-naïve prostate cancer patients. GR mRNA and protein levels were decreased in tumor tissue compared to benign tissue, whereas tissue microarrays showed that GR expression was restored in metastatic lymph node lesions and high GR expression was correlated with shorter progression-free survival in biochemically relapse patients. The regulation of GR expression is complex with at least nine splice variants. The two most documented variants are GRα and GRβ which have profoundly differing functions. GRα is transcriptionally active and GRβ appears to be primarily a repressor of GRα. It will be important to distinguish the relative expression of these variants in the context of CRPC. GR transcriptionally regulates its own gene via several glucocorticoid response elements that require interaction with additional transcription factors. Importantly in prostate cancer with the prevalence of TMPRSS2-ERG fusions is the potential negative impact of the ETS family known to decrease GR transcription yet GR on the other hand can bind TMPRSS2 regulatory regions (2). Puhr et al. revealed a negative relationship between GR and AR by screening of different human prostate cell lines. This is consistent with reports that GR is negatively regulated by AR (9,10).

To investigate whether GR is essential for prostate cancer cell proliferation, the authors applied shGR vector and mifepristone to inhibit GR signaling which resulted in decreased cell proliferation and an impaired ability to form 3D-speroids in GR positive cell lines. However, the role of AR requires additional consideration since mifepristone is a potent antiandrogen and knockdown of AR was incomplete.

Abiraterone is an inhibitor of CYP17 (17-hydroxylase/C17,20-lyase) which is a critical enzyme for biosynthesis of androgen. Recently it has been reported that abiraterone is converted to D4A, which also has potency as an AR antagonist (11). GR expression can be upregulated following antiandrogen therapy including enzalutamide, while the potential role of abiraterone in GR signaling remains to be determined. To this end, the authors developed abiraterone insensitive cell lines by long-term exposure to abiraterone. These cell lines exhibited the gain of GR expression which remained stable even 5 weeks after abiraterone withdrawal. Authors further confirmed GR functional activity through analyzing Serum and Glucocorticoid regulated Kinase 1 (SGK-1) mRNA levels. This gene is known to be regulated by both AR and GR (12,13). Here it appeared to be regulated by GR but not AR in abiraterone and enzalutamide insensitive LNCaP-abl cell lines. More importantly, GR blockade by mifepristone inhibited SGK-1 upregulation and tumor cell proliferation. In addition to these findings, a previous study has demonstrated that SGK-1 over-expression confers resistance to castration in vivo (14). These discoveries suggest that increased GR-regulated SGK-1 expression may contribute to CRPC progression.

In summary, understanding the role of transcriptionally active GR in CRPC is in its infancy. A systematic analysis of GR and AR, and their isoforms, plus other interacting proteins with clinical responses and survival are required to identify if some patients may benefit from antagonists of GR. Here Puhr et al. contribute to the body of evidence supporting that GR expression is associated with reduced progression-free survival and propose a dual AR/GR blockade to overcome resistance to antiandrogen therapy (Figure 1). Due to the established beneficial clinical outcomes of application of glucocorticoids, further clinical studies based on consideration of GR status in prostate tumors are necessary to validate the clinical significance of glucocorticoids in acquisition of antiandrogen resistance. 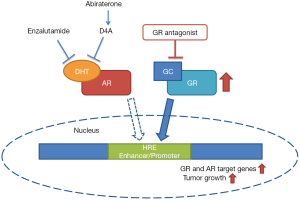 Funding: This work was supported by the US National Cancer Institute (#R01 CA105304) awarded to MD Sadar.

Provenance and Peer Review: This article was commissioned and reviewed by the Section Editor Xiao Li (Department of Urologic Surgery, the Affiliated Cancer Hospital of Jiangsu Province of Nanjing Medical University, Nanjing, China).

Conflicts of Interest: Both authors have completed the ICMJE uniform disclosure form (available at http://dx.doi.org/10.21037/amj.2018.06.02). Dr. Sadar reports grants from US National Cancer Institute, during the conduct of the study; grants and personal fees from ESSA Pharma Inc., outside the submitted work. The other author has no conflicts of interest to declare.