MicroRNAs and cholangiocarcinoma: elucidating the effects of tiny giants

MicroRNAs (miRNAs) are small non-coding strands of RNA (approximately 18–22 nucleotides) found in plants, animals, and some viruses with functions in RNA silencing and post-transcriptional regulation of gene expression (1). MiRNAs have been considered as valuable tools for prognosis of disease as stable biomarkers and as therapeutic targets for disease amelioration (2,3). MiRNA processing begins with primary miRNA (pri-miRNA) transcribed from DNA by polymerase II. Pri-miRNA is then cleaved by RNase III endonuclease, Drosha, and is released as precursor miRNA (pre-miRNA). Upon export of the nucleus into the cytoplasm by exportin 5 (XPO5), dicer further cleaves pre-miRNA into a, now activated, miRNA dimer (2). MiRNAs can bind to the 3'-untranslated region (UTR) of messenger RNAs and interfere with their translation (1). The significant post-transcriptional regulatory step in gene expression by miRNAs makes understanding their mechanism and regulation important for the prevention and improvement of disease.

Cholangiopathies are rare diseases with poor prognosis that target the cholangiocytes, epithelial cells lining the intra- and extra-hepatic bile ducts (4). The second most common and one of the most devastating of these cholangiopathies, cholangiocarcinoma (CCA), arises from aberrant cholangiocytes in the intra- or extra-hepatic bile ducts with no therapeutic treatment aside from surgical resection (4). Even with surgical intervention, patients with CCA are usually diagnosed in advanced stages with low survival rate (2). In addition to the modification of bile, cholangiocytes are highly specialized, contain a primary cilium that serves as a chemo-, osmo-, and mechano-sensor, and are responsible for approximately 30% of total bile secretion (2,5). In recent years, primary cilium found on cholangiocytes have been shown to be important regulators of biliary disorders including CCA. Due to the aggressive nature of CCA tumors coupled with the lack of early detection and treatment, it is imperative to discover new biomarkers and therapies for patients suffering from CCA.

Many miRNAs have been identified as to have important roles in the establishment and progression of cholangiopathies. Kennedy et al. described a cluster of beneficial miRNAs that are down-regulated in CCA, miR-99a, miR-125b, and let-7c. Additionally, the review identified oncogenic miRNAs (oncomir) miR-181c and miR-34a, the former known to have increased expression resulting in regulation of NDRG2 and CCA progression (4). Xie et al. showed that targeting miR-210, in combination with polymeric CXCR4 antagonist (PCX), showed cytotoxic activity towards CCA cells and cancer stem-like cells (6). Epigenetic regulation of disease has seen an increase of focus since the discovery of non-coding RNAs. It has been found that epigenetic silencing of tumor suppressor genes results in CCA oncogenesis (7). CCA is regulated by multiple biological factors, including various miRNAs, so identifying post-transcriptional targets for reduction of CCA progression is of high importance.

In the current study by Mansini et al. the authors investigate the important role of microRNAs and epigenetic modification in CCA progression. This study confirms findings established in work by Gradilone et al. which investigated the potential role of primary cilia in the pathogenesis of CCA and the relationship between HDAC6 and CCA (8). The authors found that HDAC6 was overexpressed in CCA and its molecular overexpression in vitro resulted in a reduction in cilia and increased malignant properties. Mansini et al. demonstrate that miRNA cause the reduction of HDAC6 secretion despite similar mRNA expression in normal and CCA cholangiocyte cell lines (5). The authors assessed potential miRNAs with binding sites in the 3'UTR of the HDAC6 transcript. Two of these, miR-433 and miR-22, were down-regulated in two CCA cell lines, HuCCT-1 and KMCH. Additionally, the authors confirmed loss of expression of miR-422 and miR-22 in situ in human CCA tissue vs. normal tissue. Further in situ investigation of immature miRNA found the concentration of pri-miR-433 and pri-miR-22 trapped in the nucleus of CCA tissue, suggesting aberrant transport of precursor miRNA. Mansini et al. found that of the known precursor miRNA enzymes, only exportin-5 was significantly down regulated in the CCA cell lines. The authors further confirmed the role of Exportin-5 by overexpressing it in CCA cell lines and found that miR-433 precursor forms were reduced in nuclear fractions. Furthermore, the authors transfected cells with anti-miR-433 and anti-miR-22 and overexpressed exportin-5 to find that the malignant phenotype was restored. The authors conclude that restoration of exportin-5 expression and secretion, reduces HDAC6 and reduces its malignant phenotype in CCA lines. Using shRNA, Mansini et al. knocked down exportin-5 resulting in shorter cilia and induced proliferation. The down-regulation of exportin-5 suggests an increase in HDAC6 activity/expression since lower levels of alpha-tubulin and increased levels of pri-miR-433 are observed. These studies pinpoint a critical role for primary cilia in CCA and the potential therapeutic target that microRNAs may have directly on primary cilia function. Figure 1 describes the overall findings along with other microRNAs that might be targets for therapy. 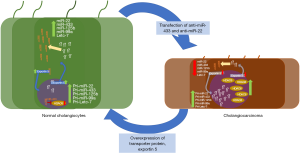 Figure 1 Working model of cholangiocyte progression to cholangiocarcinoma (CCA). Adapted from Kennedy et al. (4) and Mansini et al. (5). In normal cholangiocytes, expression of Pri-miRNAs is exported by exportin5 and processed into miRNA. MiR-433 inhibits HDAC6 expression and a normal phenotype is observed. In CCA, exportin5 is down regulated which leads to excess pri-miRNA in the nucleus, reduction of processed miRNA, and increase in HDAC6 expression. The increase of HDAC6 inhibits proper cilia formation and cells exhibit a malignant phenotype. Alternatively, blocking of miRNA function also results in a malignant phenotype. Overexpression of exportin5 recovers the normal phenotype. Pri-miRNA, primary miRNA.

This novel work describes the important role that miR-433 and miR-22 have on ciliary expression and HDAC6 activity in the development and progression of CCA. Mansini et al. illustrated how post-transcriptional modification of HDAC6 reduces the malignant phenotype seen in CCA lines of ciliary reduction and increased proliferation. Despite the elusive nature of specific miRNA function, it is important to understand that these miRNAs are not the only regulators in CCA but help illustrate the first steps towards therapeutic potentials in the treatment and amelioration of cholangiopathies. It has been shown that elevated levels of miRNAs delineate the prognosis of various cancers and may serve as a key biomarker for cancer detection (9,10). Lampis et al. (11) demonstrated that miR-21 targets genes that act as target proteins for HSP90 in human CCA cell lines and inhibition of this miRNA helps reduce CCA progression. Saha et al. (9) similarly found that over expressing levels of miR-29a ectopically reduced proliferation and induced apoptosis in multiple myeloma cells. Classifying biomarkers of pathogenesis and verifying the molecular mechanisms of miRNAs in CCA should assist in early detection, and potentially alleviate pathogenesis, in patients.

This study by Mansini et al. lends understanding to the complexity behind CCA development and progression. The devastating nature of this disease calls for innovative and in-depth investigation into possible interventions at the molecular level. Intervention at the post-transcriptional level may help treat complex and enigmatic diseases. Understanding how miRNAs function, and their levels at different stages of cell health, will allow researchers to identify methods of arresting pathogenesis of CCA. Individualized medicine, through epigenetic modification activation/repression, can provide precise care to patients with poor prognosis.

Funding: Portions of this work were supported by a VA Merit Award (1I01BX003031) from the United States Department of Veteran’s affairs, Biomedical Laboratory Research and Development Service and the R01 grant from NIH NIDDK (DK108959).

Provenance and Peer Review: This article was commissioned by the editorial office, AME Medical Journal. The article did not undergo external peer review.

Disclaimer: This material is the result of work supported with resources and the use of facilities at the Central Texas Veterans Health Care System, Temple, Texas. The content is the responsibility of the author(s) alone and does not necessarily reflect the views or policies of the Department of Veterans Affairs or the United States Government.