The effect of perioperative blood transfusion on oncological outcomes in radical cystectomy patients: a narrative review

Bladder cancer (BCa) is the 6th most common cancer worldwide (1), the second in the genitourinary system with an estimated 80,470 new cases in 2019, and the 9th leading cause of cancer death (2). The majority of BCa is diagnosed after the occurrence of haematuria, with 75% of patients who presents a non-muscle invasive disease (3). However, these patients have a high risk of recurrence (50% of cases) and 20% of risk of progression at 5 years (4). Radical cystectomy (RC) with bilateral pelvic lymph node dissection (PLND) (3) represents the standard of care of very high-risk non-muscle invasive BCa and of muscle-invasive BCa. Nowadays, open radical cystectomy (ORC) is the most commonly performed surgical technique: however, in the last decade, minimally invasive surgical approaches including laparoscopic (LRC) or robotic radical cystectomy (RARC) (5) have spread worldwide. Although the introduction of these procedures, RC remains a complex surgery, burdened by high rates of perioperative morbidity and mortality: about 60% of the cases suffers from at least one complication within 90 days after surgery (6), and 30- and 90-day postoperative mortality rates are around 3% and 7%, respectively (7). Among the most common complications, there is intraoperative bleeding, which can require or not blood transfusions (BTs). This complication could be attributed to two main factors: first of all, to the technical complexity of the procedure and, secondly, to patients’ population which usually includes elderly patients with significant comorbidities. Moreover, the neoplasm itself can bleed, causing preoperative anaemia which can increase the risk of postoperative complications and the need of transfusions. Perioperative transfusion rate in patients undergoing RC is around 60% (8,9). Several studies suggested that perioperative BTs might have an impact on survival outcomes in RC patients but results reported in literature are controversial. For this reason, we sought to review the current available studies to evaluate the association between allogeneic blood transfusions (ABTs) and survival outcomes in patients treated with RC and PLND with curative intent for BCa.

We searched the Medline/PubMed database using individual or/and different combinations of terms including: “bladder cancer”, “urothelial carcinoma of the bladder”, “radical cystectomy”, “perioperative blood transfusion”, “cancer recurrence”, “survival”, “oncological outcomes” and “mortality”. Only title and abstract in English language were screened for eligibility: if included, the full text was analyzed. Our research included original article and meta-analyses from 2012 to 2019.

The effect of transfusion in surgical patients

Despite the potential life-saving role, BTs could be related to significant complications including transfusion-associated lung injury (TRALI), transmission of infections, and allergic reactions. For these reasons, over the past 40 years, several studies focused their attention on the effect of ABT in patients treated with surgery, identifying both proinflammatory and immunosuppressive effects. The first observations date back in 1973, when Opelz et al. (10) reported improved survival rates in renal-transplanted patients who received ABT compared to those who did not. Other observational studies underlined a role of ABT in decreasing the risk of recurrence in autoimmune disorders (such as Crohn’s disease) (11) and in spontaneous abortions in women with a history of recurrent abortions (12). On the other side, this immunosuppressive role can lead to deleterious effects: in 1981 Gantt et al. (13) suggested a possible association between ABT and increased risk of cancer recurrence and metastases due to the dysregulated recipient’s immune system. Other harmful effects include an increased risk of postoperative bacterial infections (14) and activation of latent CMV and HIV infections (15). 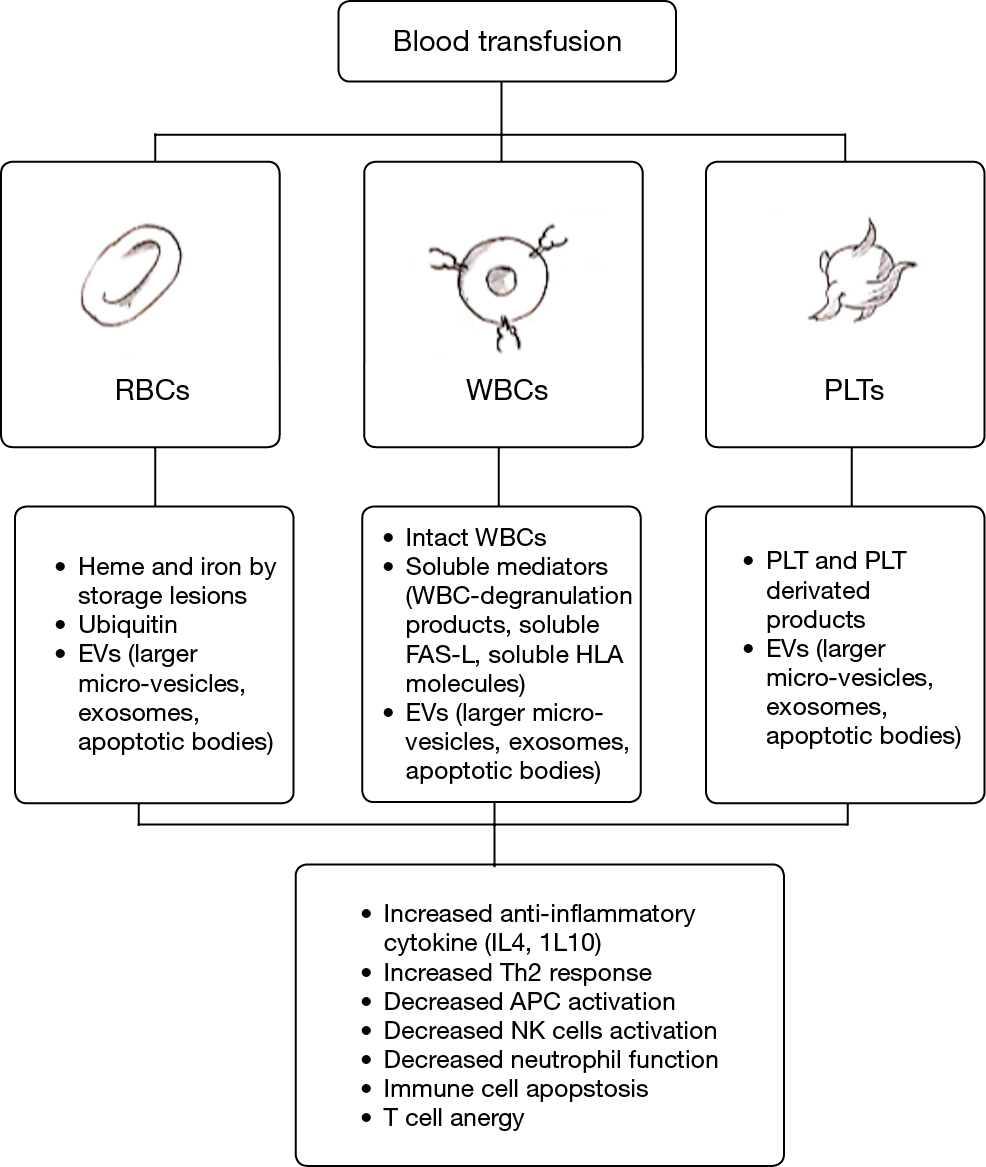 Moreover, the intra-operative release of circulating tumor cells caused by surgical manipulation (21) and the decrease of host’s immune system due to anaesthetics and opioids (22), could have an impact on oncological outcomes in patients treated with perioperative blood transfusions. These association between ABT and worse survival has been investigated in various malignancies, such as colorectal (23), hepatic (24), esophageal (25) and pancreatic cancer (26). In the urological field, contradictory data have been reported among patients with kidney (27,28), prostate (29,30) and BCa and the impact of ABT in these cancers is not yet clarified.

The oncological effect of transfusion in patients who underwent RC

Finally, there are only two systematic reviews, published by Wang et al. (44) in 2015 and by Cata et al. (45) in 2016. In the first meta-analysis ABT was an independent factor to predict all-causes mortality, cancer-specific mortality and cancer recurrence. Similarly, Cata et al. (45) found a significant association between ABT and cancer-specific survival, overall survival and recurrence-free survival.

Effect of timing of blood transfusion on survival

Few data exist regarding the role of the timing of ABT, considered as IBT or PBT.

Only a few studies investigated the relationship between number of units transfused and survival outcomes of patients treated with RC.

On the contrary, Sadeghi et al. (43) analyzed data from 638 patients: of them 209 (33%) received ABT. On multivariable analysis the number of units transfused was not an independent factor to predict cancer-specific survival (P=0.3) and overall survival (P=0.246). In Moschini et al. (42) study, the number of unit transfused was not found associated with an increased risk of distant recurrence.

RC represents a complex surgery, which often requires BTs. Several studies have investigated the effects of perioperative blood transfusions in patients with BCa treated with RC, especially in terms of oncological outcomes, investigating also the correct timing of perioperative blood transfusions. Unfortunately, the relationship between ABT and survival outcomes is still unclear, with contrasting results reported in literature: further studies are needed to explain this complex relationship in order to address the medical practice to an individualized treatment and to improve prognosis of these fragile patients.