Clear cell hidradenoma of the foot: a case report with literature review

A 66-year-old male presented to the orthopedic clinic with a slow growing soft tissue lump near the right heel for 2 years. The lesion was partially excised 1 year back, including the removal of a foreign body, possibly glass. The slow growing mass was associated with mild intermittent pain. The skin overlying the mass was elevated but there was no evidence of ulceration or discoloration. Sonography of the plantar aspect of the right lateral heel demonstrated a 1.5 × 1.0 × 0.5 cm3 heterogeneous soft tissue mass with a thick echogenic wall and central hypoechoic area. There was no appreciable color flow on Doppler imaging (Figure 1). Sonographic findings were non-specific and differentials included chronic foreign body granuloma in view of possible glass excision. The patient underwent a biopsy, which revealed clear cell hidradenoma. Subsequently, the lesion grew in size and became increasingly painful. MRI was performed to assess the margins and depth of the lesion. The lesion was hyperintense on T2 weighted images and demonstrated intermediate signal on T1 weighted image (Figure 2). Based on these findings, it was determined that he should have surgical intervention with wide excision. Histopathology showed a dome-shaped lesion comprised of spindled and stellate cells with atypical, hyperchromatic nuclei and focally prominent nucleoli. Multinucleated giant cells were also present (Figure 3). Clinical follow up after 6 months has shown no recurrence (Figure 4). 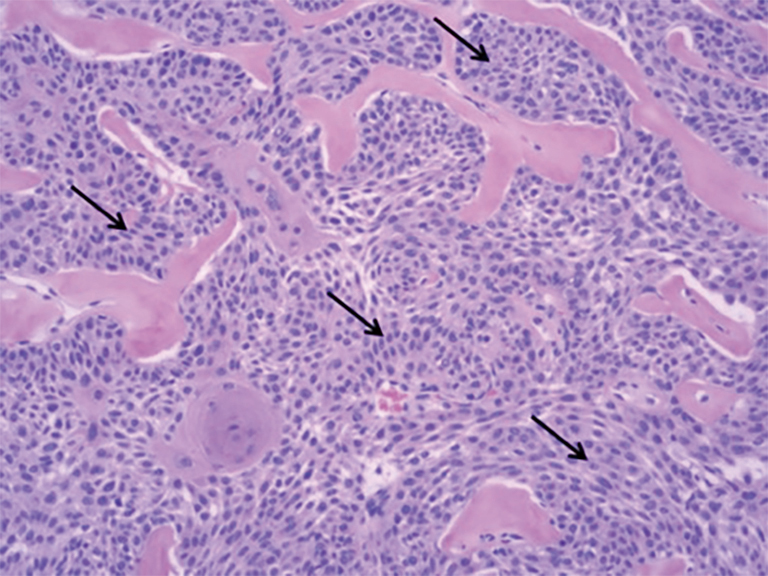 Figure 4 Timeline of the patient.

A clear cell hidradenoma is a rare sweat gland tumor. These have been conventionally described as originating from the eccrine sweat glands (1,2). However, it is now accepted that these can have apocrine origin as well (3). Other names that have been used for this tumor include nodular hidradenoma, solid-cystic hidradenoma, and eccrine acrospiroma, largely secondary to their histological characteristics. Other common diagnoses must be excluded before making a diagnosis of clear cell hidradenoma (4). It is twice as common in women as in men and can be seen in all age group populations, although they are more common during the fourth decade of life. Typical lesion size ranges from 0.3–2.0 cm with possibility of adjacent skin discoloration, ulceration and sometimes hemorrhage or fluid discharge. The literature describes the head and anterior surface of trunk as the more common locations for this tumor and to the best of our knowledge, this is the first reported case of a clear cell hidradenoma affecting the foot (5,6). Clinically, these tumors usually present as a solitary, firm intradermal nodule, measuring as small as 5 mm and may be as large as 3 cm. They may be asymptomatic or may present as focal tenderness, skin discoloration, ulceration or cutaneous discharge. These are fairly slow growing lesions, and rapid growth may indicate hemorrhage or malignant conversion.

Histologically, the tumor is often well circumscribed, encapsulated, composed of cystic and solid elements. The solid portion is composed of two types of cells, i.e., fusiform cells in periphery with basophilic cytoplasm and polygonal cells in the center, with clear cytoplasm. The polygonal cells contain abundant glycogen that washes out on staining and embedding, making them appear clear on histology and hence their name, i.e., clear cell hidradenoma (7). The cystic components contain an eosinophilic homogenous material. Malignant features in histology include hyperchromatic nuclei, marked pleomorphism, atypical mitosis and invasive borders. Distinction of benign versus malignant is often difficult. It is unclear whether clear cell carcinoma arises de novo or if represents malignant conversion of a preexisting benign clear cell hidradenoma (8,9). Malignant tumors tend to metastasize through the lymphatic and vascular pathways and have a poor prognosis (7).

On ultrasonography, which is cheap and an easily accessible tool to see the lesion, it is most often seen as a lobulated mass containing cystic components with varying degrees of complexity (10). Varying amounts of solid tissue may be seen with considerable vascularity demonstrated as color flow on duplex imaging. Solid components can show calcifications as well (7,11). On MR, these tumors appear as superficial lesions with a mix of solid and cystic masses, characterized by fluid levels in the cystic components and enhancing solid components (12,13). The cystic components demonstrate variability in MRI signal intensity that has been attributed to varying amounts of cholesterol, hemorrhage, and sweat gland secretions expressed in the fluid. Imaging modalities have not yet proven to be able to identify malignant features in a clear cell hidradenoma. However, MRI is useful in diagnosis due to higher contrast resolution than CT scan and better characterization of soft tissue (14).

Treatment of hidradenoma is by surgical excision, with emphasis on clear resection margins to prevent tumor recurrence. Recurrence has been described and is related to inadequate excision (15). To achieve clear resection margins, wide surgical excision with at least 2–3 cm has been advocated in some reports. In our case, an initial partial excision was done before the diagnosis was confirmed, after which the appropriate management with complete excision was performed. Malignant transformation of previously indolent lesions is a recognized complication, requiring extensive surgery to achieve local control (16).

Our case describes a unique location for clear cell hidradenoma and demonstrates the importance of considering this diagnosis among the differentials for slow growing complex superficial lesion in any part of the body. Further, radiological findings help guide the physicians in understanding the characteristics. In light of the confirmed diagnosis of clear cell hidradenoma, the prior partial excision was inadequate to manage this condition and demonstrates the importance of considering even unlikely diagnoses in management.

The common differential diagnoses of a clear cell hidradenoma on clinical examination would include epidermal inclusion cyst, ganglion cyst, vascular malformation, peripheral nerve sheath tumor, synovial sarcoma and basal cell sarcoma. A differential diagnosis of post traumatic hematoma can also be considered depending on location, as was considered in our case. An epidermal inclusion cyst is usually a well-circumscribed, mildly echogenic, oval mass with occasional anechoic or echogenic components, increased acoustic transmission, hypoechoic rim and without color flow on Doppler. On MRI they appear as intermediate to high signal intensity lesions on T2 weighted images with occasional low signal debris and do not show post-contrast enhancement (17). A vascular malformation sometimes can be distinguished by prominent vascular channels on grayscale US and color Doppler, with occasional phleboliths demonstrating posterior acoustic shadowing within the mass. On MRI these appear as isointense or hypointense lesions in comparison to muscle on T1 weighted imaging, with high signal intensity on T2. They may also show serpentine vascular flow voids, evident on both sequences, with strong post contrast enhancement (18). A ganglion cyst appears anechoic, sometimes with low level internal echoes or septations, and does not show vascular flow on Doppler examinations (17). On MRI, ganglion cysts are characterized by smooth well-circumscribed margins, thin walls, and homogeneous hyperintensity on T2 weighted images. A thin stalk communicating with the joint space may also be seen (19). Peripheral nerve sheath tumors are usually hypoechoic masses with posterior acoustic enhancement on grayscale US. The presence of intrinsic blood flow on color Doppler and peripheral nerve continuity aid in their diagnosis on sonography (20,21). The MR signal intensity of peripheral nerve sheath tumors is non-specific, with isointensity or slight hyperintensity in comparison to muscle on T1-weighted images and hyperintensity on T2-weighted images, as well as a variable enhancement pattern and foci of heterogeneity (18). Synovial sarcoma is usually seen as a focal, nodular, round or lobulated solid, hypoechoic soft tissue mass on US (22). On MRI they appear as multilobulated and heterogeneous lesions (creating the “triple sign”) with hemorrhage, fluid levels, and internal septa (22). Basal cell carcinoma (BCC) appears as a hypoechoic or heterogeneous mass with irregular borders on US (23). BCC appears T1-iso or hyperintense and T2-hyperintense relative to muscle on MR imaging (23).

Hidradenoma is a slow growing tumor of the sweat glands infrequently encountered on the foot. The differential diagnoses for a complex superficial subcutaneous lesion should include hidradenoma.

Conflicts of Interest: All authors have completed the ICMJE uniform disclosure form (available at http://dx.doi.org/10.21037/amj-20-24). The authors have no conflicts of interest to declare.

Ethical Statement: The authors are accountable for all aspects of the work in ensuring that questions related to the accuracy or integrity of any part of the work are appropriately investigated and resolved. All procedures performed in studies involving human participants were in accordance with the ethical standards of the institutional and/or national research committee(s) and with the Helsinki Declaration (as revised in 2013). Hidradenoma should be considered as a differential diagnosis in case of a complex superficial subcutaneous lesion. As it is not frequently observed in the foot, this case report helps provide further information on the topic. A reasonable individual would be unlikely to object to publication as no personal information has been provided and informed consent would be unusually burdensome to obtain. The authors have completed the CARE guideline checklist.