Eosinophilic cellulitis (EC), also known as Wells syndrome, is a rare dermatosis which typically presents as solitary or multiple infiltrated erythematous plaques, often mimicking cellulitis or urticaria. Before a case of EC is deemed idiopathic, inciting factors such as underlying malignancies, drugs, arthropod bites, contact allergies, and infections have to be excluded first (1). Whilst the latter typically comprises that of a parasitic nature, an association with strongyloidiasis has yet to be described. We thus present a case of EC arising in association with occult strongyloidiasis. Given the not uncommon pitfall of misdiagnosing pseudocellulitis syndromes, we also emphasise the clinical rationale underpinning our evaluation for differential diagnoses beyond suppurative cellulitis, which in turn led to appropriate treatment with anti-helminthics rather than antibiotics.

We present the following article in accordance with the CARE reporting checklist (available at http://dx.doi.org/10.21037/amj-20-150).

A 59-year-old Indian male with presumptive lower limb cellulitis and was referred to a dermatologist for a four-day history of painful, pruritic rashes affecting the chest, abdomen, arms and legs, in association with a blistering rash on his right leg. This was accompanied by a three-day history of self-limiting diarrhea. He had not received any treatment with antibiotics preceding this presentation. He reported two similar episodes of abrupt blistering of the same limb in his 20s and 50s respectively that spontaneously remitted over several weeks without any treatment. He denied antecedent arthropod bites or exposure to contactants. His medical history was significant for chronic obstructive pulmonary disease and obstructive sleep apnea, for which he receives salbutamol inhalers as and when required.

Examination revealed tender, diffuse, blanchable, erythematous induration of his right lower limb with clusters of tense bullae overlying the right knee and thigh (Figure 1). His left lower limb was also diffusely erythematous with comparatively less swelling. In addition, there were also migratory, blanchable, discrete erythematous patches and plaques on the chest, abdomen and arms which were consistent with urticaria. There was no fever, lymphadenopathy or stigmata of venous insufficiency. 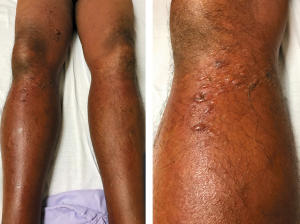 Initial investigations showed normal leukocyte counts 7.7×109/L and C-reactive protein levels. Blood cultures were negative and there was no ultrasonographic evidence of deep vein thrombosis (DVT) in the right leg. Peripheral eosinophilia ranging from 0.91 to 1.17×109/L was noted. The lack of fever, paucity of evidence of sepsis biochemically, and clinical involvement of bilateral legs prompted evaluation for pseudo-cellulitis. A punch biopsy from a blister on his right thigh was performed. He was nonetheless started on intravenous cefazolin 1g every 8 hours to empirically cover for bacterial cellulitis and also topical betamethasone valerate 0.1% ointment every 12 hours while waiting for the punch biopsy results to return. All his skin lesions resolved expediently over the next four days.

On the fourth day of his inpatient stay, his punch biopsy returned and revealed intense upper dermal edema resulting in a subepidermal blister (Figure 2). A superficial and deep perivascular infiltrate of lymphocytes with numerous eosinophils at various stages of degranulation along with flame figures were seen (Figures 2,3). No neutrophils or suppuration was noted to suggest an infective process. Direct immunofluorescence was negative. His antibiotics were subsequently stopped as the histological evidence pointed away from a cutaneous infection. 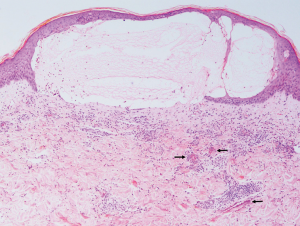 Figure 2 There is a subepidermal blister resulting from intense upper dermal edema. A superficial and deep perivascular infiltrate of lymphocytes with numerous eosinophils is present, in association with eosinophilic flame figures (black arrows). (H&E, magnification ×40). 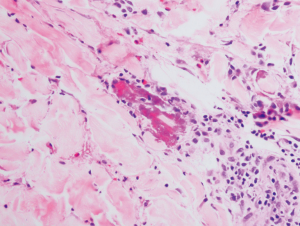 Figure 3 A typical flame figure in the centre of the field, in association with some lymphocytes, histiocytes and eosinophils. (H&E, magnification ×200).

He was diagnosed with EC secondary to occult strongyloidiasis on the eighth day of hospital admission and received oral ivermectin 18 mg (200 mcg/kg) daily for two days with oral albendazole 400 mg daily for three days. He did not experience any adverse reactions during his stay and was subsequently discharged with the aforementioned anti-helminthics. He was also discharged with topical betamethasone valerate 0.1% ointment every 12 hours and oral cetirizine 10 mg daily as required, for which he was told to continue until the total resolution of his rash. A timeline of this clinical course is depicted in Figure 4.

He was also noted to have experienced a Mazzotti reaction three days into his anti-helminthic treatment where he sought medical attention for diffuse urticaria, which resolved with intravenous diphenhydramine 50mg. This, together with a repeat blood count demonstrating rapid normalisation of his absolute eosinophil count, indicate successful eradication of helminthiasis. A follow up was made 3 months after his discharge from hospital and reported no further recurrence of any rash so far.

All procedures performed in studies involving human participants were in accordance with the ethical standards of the institutional and/or national research committee(s) and with the Helsinki Declaration (as revised in 2013). Verbal informed consent was obtained from the patient for publication of this case report and any accompanying images.

Cellulitis is a common condition that presents to the internist, with more than 650,000 cases per year in the United States alone. Cellulitis accounts for an estimated 3.7 billion USD in healthcare costs, with half of costs attributable to room costs (2,3). In spite of its common occurrence, there are many dermatoses that mimic infective bacterial cellulitis which if recognised, can avoid inaccurate usage of antibiotics which engender antimicrobial resistance, and reduce cost of care. These include pseudo-cellulitic etiologies such as DVT, ruptured Baker’s cyst, acute lipodermatosclerosis, panniculitides and uncommonly, EC. Pseudo-cellulitis must be suspected in a patient who is not septic clinically and biochemically, or when the “cellulitis” afflicts bilateral lower limbs simultaneously (4,5). Indeed, the presence of bilateral limb involvement in validated predictive models for the diagnosis of cellulitis (such as ALT-70) renders the likelihood of an infective aetiology low, making the evaluation for an alternative diagnosis necessary (5).

EC, also known as Wells syndrome, is a rare dermatosis affecting predominantly adults with no ethnic or gender predilection. It typically presents acutely over 2–3 days as solitary or multiple infiltrated erythematous plaques, resembling cellulitis or urticaria (6). Clinical heterogeneity exists, however, and seven variants have been delineated: plaque-type, granuloma-annulare-like, urticaria-like, papulovesicular, bullous, papulonodular, and fixed-drug-eruption-like (7). Lesions tend to affect the limbs, and patients may report associated itching or burning. Mild constitutional symptoms occur in about 20% of patients (8), and blood eosinophilia is observed in 15–67% of cases (1). Lesions resolve without scarring over 2 to 8 weeks (9), but recurrences are the rule, with intervening remissions lasting months to years, as seen in our patient (10).

Histologically, EC is characterized by edema, prominent dermal eosinophilic infiltrates, and “flame figures” (degranulation products from eosinophils, such as major basic protein, encircling collagen bundles). To confound matters further, “flame figures” are not pathognomonic of EC and can be seen in other dermatoses such as pemphigoid, arthropod bites, parasitoses, and eosinophilic granulomatous polyangiitis (Churg-Strauss syndrome). Granulomatous infiltrates may be observed in older lesions 2–8 weeks post-onset (1). As such, good clinical correlation is necessary to clinch this diagnosis.

Various inciting factors have also been reported in EC and these must be excluded before it is deemed idiopathic. This includes underlying malignancies (visceral or hematologic), drugs, arthropod bites, contact allergies, and infections (usually of parasitic nature) (1). Given the rarity of EC, the strength of such associations has yet to be ascertained; neither is there consensus regarding the extent of evaluation for an underlying disorder. Notably, there have been no prior reports of EC or Wells syndrome in the literature, arising in the context of strongyloidiasis.

Several treatments exist for idiopathic EC, but there is no well-established first-line agent due to paucity of robust data (11). Currently, the best available evidence is for short-term systemic corticosteroid therapy (8); other options include topical corticosteroids/calcineurin inhibitors, dapsone, oral anti-histamines, oral tetracyclines, antimalarials, TNF-inhibitors, UV-A phototherapy, colchicine and cyclosporine (11). However, it is vital to recognise should an underlying cause as mentioned above be found to be driving the recurrent presentation of EC, treatment targeted at the underlying cause would achieve cure.

We wish to underscore the importance of occult helminthiasis in EC. In instances where systemic corticosteroids were to be given for EC before excluding occult helminthiasis (especially in the setting of eosinophilia which may suggest active infection), the move may prove to be fatal. High dose systemic corticosteroids in the setting of underlying strongyloidiasis carries the risk of hyperinfection syndrome due to immunosuppression. This is associated with a staggering mortality rate of up to 87%, owing to pulmonary haemorrhage and gut perforation due to translocation of Strongyloides spp. through visceral compartments (12).

Another aspect of this case we would like to emphasise is the false sense of security accorded by incomplete evaluation of helminthic infection and/or empiric anti-helminthic treatment. While despite having three fecal samples being negative for any microscopic evidence of ova, cysts and parasites, it may not be sufficient to entirely rule out occult nematode infection (13). If there is a high clinical suspicion for occult helminthiasis, immunoassays (such as serological studies) should be done to confirm the presence of helminths. In the event that immunoassays are not available, it may be prudent to treat empirically with anti-helminthics. An empirical course of oral ivermectin 200 mcg/kg daily for two days and oral albendazole 400 mg daily for three days should be given to adequately cover for the vast majority of helminths (14,15). Other treatments short of the above eradicates helminths partially and may run the risk of hyperinfection syndrome when an immunosuppressant is introduced at an inopportune time. Development of the Mazzotti reaction, due to an IgE-mediated response incited against fragmented helminths following treatment, can also be used as a surrogate for successful treatment of any underlying helminthiasis (16).

From a public health standpoint, we were unable to ascertain whether the other residents in the rural village compound had similar symptoms to the patient, as the patient has since moved out of the compound after his teens. Current evidence suggests that mass deworming programmes confers limited benefit and mass deworming alone is unlikely to lead to parasitic elimination. Complementary measures such as improving sanitation and access to improved drinking water sources should also be undertaken to address the issue of parasitic infections and transmission (17-19).

In conclusion, the diagnosis of EC requires a high index of suspicion as well as intimate clinicopathologic correlation. The internist must be aware of such an entity when encountered with pseudo-cellulitis and note its association with helminthic infestations.

Reporting Checklist: The authors have completed the CARE reporting checklist. Available at http://dx.doi.org/10.21037/amj-20-150

Conflicts of Interest: All authors have completed the ICMJE uniform disclosure form (available at http://dx.doi.org/10.21037/amj-20-150). The authors have no conflicts of interest to declare.

Ethical Statement: The authors are accountable for all aspects of the work in ensuring that questions related to the accuracy or integrity of any part of the work are appropriately investigated and resolved. All procedures performed in studies involving human participants were in accordance with the ethical standards of the institutional and/or national research committee(s) and with the Helsinki Declaration (as revised in 2013). Verbal informed consent was obtained from the patient for publication of this case report and any accompanying images.