Clinicopathological and genetic features of anastomosing haemangioma of the kidney: a narrative review

For this narrative review, we extensively searched the English literature for all cases of anastomosing haemangioma of the kidney. This article summarizes state-of-the-art knowledge on the epidemiology, clinical and pathologic features of anastomosing haemangioma of the kidney as well as treatment, prognosis, and differential diagnosis. We present the following article in accordance with the Narrative Review reporting checklist (available at http://dx.doi.org/10.21037/amj-20-181).

Anastomosing haemangioma of the kidney is extremely rare. To date, approximately 75 cases have been reported in the literature, mostly as case reports or series (1-25). The mean age of patients at diagnosis is 49 years (range, 10–83 years) (6,11,12). There is a slight male predilection with a male-to-female ratio of 2:1 (6). There is no known racial association.

Most anastomosing haemangiomas of the kidney are discovered incidentally during imaging or examination of nephrectomies for other renal neoplasms (6). There are no symptoms unique to this tumour. Patients may present with haematuria, abdominal pain, abdominal mass (6) and lower urinary tract symptoms (LUTs) (13). Rarely, patients may present with retroperitoneal haematoma (16,17) or life-threatening haemorrhage (17,18).

Grossly, the tumours are well circumscribed masses. They are mostly unencapsulated with fleshy and spongy mahogany brown or haemorrhagic cut surface. The tumours are often small, averaging 2.2 cm in diameter (range, 0.1–12 cm) (6,12). Typically, anastomosing haemangiomas are unilateral and solitary lesions. However, bilateral (2,16,19) and multifocal tumours have been described (16,21). Rarely, gross extension of tumours into the renal vein (1,2,23) or segmental branches of the renal vein (16,24) may be seen. Additionally, the tumours may invade renal sinus fat (16) and perinephric fat (1).

Microscopically, the tumours are well demarcated with a vaguely lobular architecture on low power examination. They are composed of anastomosing sinusoidal capillary-sized vessels lined by a single layer of bland endothelial cells (shown in Figure 1). The vascular channels are separated and supported by loose stroma. 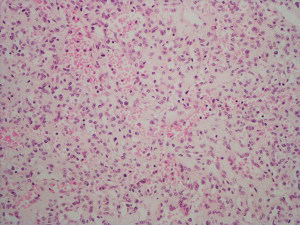 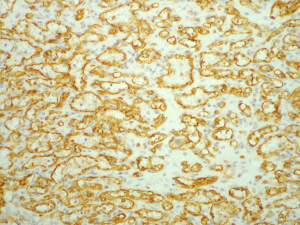 Figure 2 Anastomosing heamangioma of the kidney. The tumour shows immunolabelling for CD31 (×200). 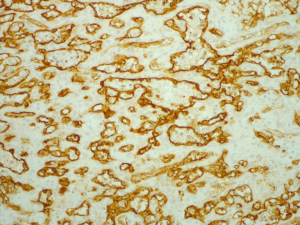 Figure 3 Anastomosing heamangioma of the kidney. The tumour is positive for CD34 (×200).

Upon activation of GPCRs by ligand binding, Gαq releases GDP in exchange for guanine triphosphate (GTP), separates from the complex and activates downstream signalling pathways that are important in the regulation of cell proliferation, survival, protein synthesis and development of blood vessels (30). This signalling is turned off by intrinsic GTPase activity which converts GTP to GDP. Activating somatic mutations in GNAQ impairs the ability of the altered Gαq protein to return to its inactive state. As a result, Gαq remains in its active GTP-bound state and downstream signalling pathways are constantly turned on (26,27,29-31).

Of the 15 anastomosing haemangiomas studied using next generation DNA sequencing, 9 harboured GNAQ p.Q209H mutation; 1 had GNAQ p.Q209L mutation; 4 showed GNA14 p.Q205L mutation; and 1 had neither GNAQ nor GNA14 mutation (26,27). No other pathogenic mutations particularly mutations seen in angiosarcomas were identified in these studies (26). Q205 in GNA14 is a hotspot and the equivalent residue to Q209 in GNAQ (27).

Interestingly, these mutations are not unique to anastomosing haemangiomas. Mutations in GNAQ and its paralogues including GNA11 and GNA14 have been identified in hepatic small vessel neoplasm (HSVN) (32), congenital haemangiomas (33), non-syndromic port wine stains, Sturge-Weber syndrome (34), cherry haemangiomas (35) and melanocytic lesions such as primary uveal melanoma and blue nevi (29).

Of the 75 cases described in the literature, follow-up data were available for 38 patients (50.7%). The mean follow-up time was 24.8 months (range, <1–156 months). One patient died from unrelated disease—embolic cerebrovascular event (13). There was no evidence of recurrence, metastasis or tumour-related death (Table 1).

Unlike anastomosing haemangiomas, primary renal angiosarcomas are malignant vascular tumours. Most renal angiosarcomas occur in patients in their 6th or 7th decade of life, although a wide age range (24–95 years) has been reported (36). They are typically symptomatic and frequently metastasise to various anatomical sites including the liver, lungs, bone, skin, spleen, and lymph nodes. Angiosarcomas are usually large and comprises capillary-sized blood vessels lined by malignant endothelial cells. The neoplastic cells are pleomorphic with hyperchromatic nuclei. Multilayering, abnormal mitotic figures and necrosis are common features. The prognosis of primary angiosarcoma of the kidney is poor despite treatment with surgery, chemotherapy and radiotherapy (36).

Kaposi’s sarcoma is a vascular neoplasm associated with human herpesvirus-8 (HHV-8). Clinically, four variants have been described including classic, endemic, AIDS-associated, and iatrogenic. This tumour is extremely rare in the kidney (37). Microscopically, Kaposi’s sarcoma consists of thin-walled blood vessels, spindled cells, lymphoplasmacytic infiltrate, slit-like spaces containing extravasated red blood cells and DPAS-positive hyaline globules. Hemosiderin deposits may be present. Common to both Kaposi’s sarcoma and anastomosing haemangioma are the presence of thin-walled blood vessels, hyaline globules (although more frequently seen in Kaposi’s sarcoma), and the expression of vascular markers (CD31 and CD34). However, Kaposi sarcoma can be confirmed by the expression of HHV-8-associated protein LANA-1 (6). The outcome is related to the extent of disease and visceral involvement (37).

Intravascular papillary endothelial hyperplasia (Masson’s tumour) is a reactive lesion that commonly occurs within the extremities and head and neck. Rare cases have been reported in the kidney (38). The lesion is characterized by organizing thrombi, prominent papillary structures with hyalinised or fibrous stalks, and hyperplastic endothelial cells, often within the lumen of a large blood vessel, but also in haematomas, or haemangiomas. There are no mitotic figures, atypia or necrosis. These lesions are benign with an excellent prognosis (6,38).

Because anastomosing haemangioma may show fatty changes, they must be distinguished from angiomyolipoma (AML) (39). Angiomyolipoma is composed of thick-walled poorly organized blood vessels, mature adipose tissue and smooth muscle. Unlike anastomosing haemangioma, angiomyolipoma is characterized by the co-expression of smooth muscle markers (smooth muscle actin and calponin) and melanocytic markers (Melan-A, HMB-45 and microphthalmia transcription factor) (6). Classic AMLs are benign; however, epithelioid AMLs may show aggressive behaviour including recurrence and metastasis (40).

Anastomosing haemangiomas of the kidney share similar clinical and imaging features with other renal neoplasms thus making them radiologically indistinguishable. They mimic primary renal angiosarcomas which must be considered as a differential diagnosis and ruled out. Unlike primary renal angiosarcoma with a poor prognosis, anastomosing haemangioma is benign and has an excellent prognosis with no recurrent or metastatic disease during follow-up. Definitive diagnosis requires pathologic assessment. Awareness of this rare tumour and the recognition of its benign clinical course should allow for accurate diagnosis and consideration for nephron-sparing surgery.

We would like to thank Philip Brown and Alexandra Roche for proofreading this article.

Conflicts of Interest: Both authors have completed the ICMJE uniform disclosure form (available at http://dx.doi.org/10.21037/amj-20-181). The authors have no conflicts of interest to declare.