Helicobacter pylori (H. pylori) infection is one of well-known risk factors for gastric cancer (1), which is one of the most common cancer in China (2). It may also be involved in the pathogenesis of some extragastric diseases, including idiopathic thrombocytopenic purpura (3), irritable bowel syndrome (4), and non-alcoholic fatty liver disease (5). H. pylori infects approximately 4.4 billion individuals worldwide (6). The prevalence of H. pylori infection varies among geographic areas in the world. It is the highest in Africa (79.1%), Latin America and the Caribbean (63.4%), and Asia (54.7%), but is the lowest in Northern America (37.1%) and Oceania (24.4%) (6). The estimated prevalence of H. pylori infection is 44.2% among the adults living in mainland China from 1990 to 2019, involving 589 million individuals infected with H. pylori (7). Furthermore, it is also very different among regions in mainland China, which may be influenced by several factors, such as age, gender, socioeconomic status, environmental conditions, hygienic habits, occupation, and water supply (8-10). Its prevalence is relatively higher in the northwestern (51.8%), eastern (47.7%), and southwestern China (46.6%).

Since June 2020, we have been prospectively and persistently collecting the data of patients that were admitted to the Department of Gastroenterology and had undergone H. pylori tests. In the present study, we retrospectively reviewed the data of patients admitted between June 2020 and September 2021. A diagnosis of H. pylori infection is based on the results of 13C-urea breath test, 14C-urea breath test, serological antibody test, and stool antigen test (8). Patients who had undergone H. pylori eradication treatment before their admissions and those who were lacking of the data on H. pylori infection related risk factors were excluded. Eligible patients were further classified into military and civilian groups based on their identities. An investigator employed the same criteria to record the risk factors that were potentially associated with H. pylori infection. All patients’ information was de-identified. The individuals’ informed consents for this retrospective analysis were waived. The study was conducted in accordance with the Declaration of Helsinki (as revised in 2013). The study was approved by the Medical Ethics Committee of the General Hospital of Northern Theater Command (No. Y [2021] 106).

All statistical analyses were performed with IBM SPSS 20.0 (IBM Corp., Armonk, NY, USA). Continuous variables were expressed as median (range). Categorical variables were expressed as frequency (percentage). Non-parametric Mann-Whitney U test was used to compare continuous variables and Chi-square and Fisher’s exact tests were used to compare categorical variables. Univariate and multivariate analyses were performed after checking the collinearity among the variables. Logistic regression analysis was used to identify the risk factors of H. pylori infection. Only variables that are statistically significant in univariate logistic regression analyses were further included in multivariate logistic regression analyses. Odds ratios (ORs) with 95% confidence intervals (CIs) were calculated. A two-sided P<0.05 was considered statistically significant. 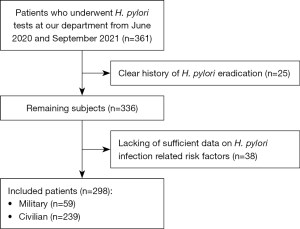 Our study found that the prevalence of H. pylori infection in inpatients was 30.5%, which was lower than that reported in previous studies from China (13). This finding may support a declining trend in the prevalence of H. pylori infection (14), probably due to the development of China’s economy, the improvement of public health conditions and living standards, and the increased awareness and willingness to screen H. pylori.

Another important finding of our study is that H. pylori infection was also significantly associated with poor hygienic habit. The frequency distribution of H. pylori infection among different populations and among different socioeconomic groups within a given population is clearly correlated with the standards of public hygiene (20). First, previous studies have shown that poor hand hygiene may have a higher risk of gastrointestinal infection; by comparison, good hand hygienic habits can effectively prevent from diseases (21). Such an association between hand hygiene and H. pylori infection may be in favor of H. pylori transmission by the fecal-oral route. Second, sharing cups may lead to cross-infection and oral transmission of H. pylori, because H. pylori DNA has been found in saliva (22). Third, halitosis symptoms can be observed in people with dental calculus and plaque, which can provide an environment for oral H. pylori colonization. Then, oral H. pylori invades the stomach with saliva, which can lead to gastric H. pylori infection (23). Therefore, oral health conditions may directly or indirectly affect the process of H. pylori infection or reinfection (24). On the other hand, halitosis is caused by volatile sulfur compounds (VSCs), which are generated through the decomposition of protein contained in food residue by oral bacteria (25). An increased level of VSCs may lead to erosive changes in upper gastrointestinal tract mucosa, which in turn leads to H. pylori colonization at the injured site (26,27).

Our univariate analyses also demonstrated that the risk of H. pylori infection was associated with drinking tea in the overall patients, especially among military groups. By contrast, previous studies found that drinking tea can prevent from H. pylori infection through antibacterial activity of catechins (30). This difference may be closely related to the discrepancy in drinking tea habits among regions. Most Chinese people are used to drinking tea on an empty stomach, drinking strong tea, and leaving tea residue in the cup after drinking tea. Tea residue contains cadmium, lead, mercury, arsenic, and other harmful metals and even some carcinogens, such as nitrite. These substances will adhere to the surface of the tea cup and enter the digestive system with drinking tea, and then combine with proteins, fatty acids, and vitamins in food to form insoluble precipitates. It not only hinders the absorption and digestion of these nutrients, but also damages the gastrointestinal mucosa, facilitating H. pylori colonization (31).

The length of service of military personnel, a special occupational group, may affect H. pylori infection. A previous study showed that the H. pylori infection rate in military personnel serving for 3 years or more (63.2%) was significantly higher than those serving for less than 3 years (53.4%), and the difference was statistically significant between the two groups (P=0.028) (32). Accordingly, the military service duration was defined in the present study. However, we did not find any significant difference.

There are some limitations in our study. First, a relatively small number of inpatients may underestimate the impact of some risk factors on the development of H. pylori infection. Second, our study population is only symptomatic patients admitted to the hospital, which cannot sufficiently reflect the real number of patients infected by H. pylori. Third, some questions evaluated in our patients may be more subjective. For example, halitosis is not evaluated by objective methods, such as the organoleptic method or volatile sulfur monitoring. Thus, our statistical results are potentially biased.

In conclusion, poor personal and hygienic habits may predispose to H. pylori infection. In future, it is necessary to design more rigorous large-scale studies to further verify these risk factors and establish a simple prediction model to more accurately evaluate the risk of H. pylori infection among military personnel.

Reporting Checklist: The authors have completed the STROBE reporting checklist. Available at https://amj.amegroups.com/article/view/10.21037/amj-22-37/rc

Conflicts of Interest: All authors have completed the ICMJE uniform disclosure form (available at https://amj.amegroups.com/article/view/10.21037/amj-22-37/coif). XQ serves as an Editor-in-Chief of AME Medical Journal. The other authors have no conflicts of interest to declare.

Ethical Statement: The authors are accountable for all aspects of the work in ensuring that questions related to the accuracy or integrity of any part of the work are appropriately investigated and resolved. The study was conducted in accordance with the Declaration of Helsinki (as revised in 2013). The study was approved by the Medical Ethics Committee of the General Hospital of Northern Theater Command (No. Y [2021] 106) and the individuals’ informed consents for this retrospective analysis were waived.