Stewart-Treves syndrome is the development of angiosarcoma in the setting of chronic lymphedema. A majority of documented cases involve the upper extremity with only few demonstrating its occurrence in the lower extremity (1,2). Stewart-Treves syndrome presents most often in a patient with a history of breast cancer after a radical mastectomy or radiation therapy but can occur in the setting of chronic lymphedema secondary to other causes (2).

We present a case of Stewart-Treves syndrome in the lower extremity of a patient with numerous comorbidities and chronic lymphedema. Identifying concerning skin lesions worthy of biopsy in the setting of chronic lymphedema can be difficult due to the associated skin changes. This case report provides illustrations of the characteristic findings of Stewart-Treves syndrome in the lower extremity. We present the following case in accordance with the CARE reporting checklist (available at https://amj.amegroups.com/article/view/10.21037/amj-22-16/rc).

A 76-year-old Caucasian female with a history of type 2 diabetes, hypothyroidism, hypertension, heart failure with preserved ejection fraction, and chronic lymphedema presented with non-healing hemorrhagic, necrotic nodules on her left lower extremity (Figure 1A,1B). The patient’s medication list included subcutaneous insulin, levothyroxine, losartan, amlodipine, furosemide, and clopidogrel for her chronic conditions. She was not immunosuppressed, and her human immunodeficiency virus (HIV) status was unknown. Upon examination, shotty lymphadenopathy of the left popliteal fossa was appreciated and violaceous subcutaneous papules of the left thigh raised concern for metastasis. Punch biopsies of the left lower extremity necrotic nodules showed multinodular dermal tumors composed of vascular spaces lined by pleomorphic cells with prominent nucleoli and atypical mitotic figures (Figures 2,3). The cells of interest stained positive for CD31, CD34, and FLI1, revealing vascular endothelial origin with Ki-67 staining revealing a 50–60% proliferation index (Figures 4-6). Staining was negative for pancytokeratin, S100, SOX10, and HHV8. These findings were consistent with angiosarcoma and the patient was subsequently diagnosed with Stewart-Treves syndrome. 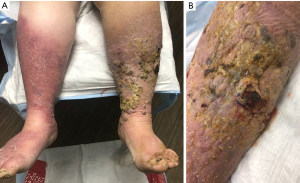 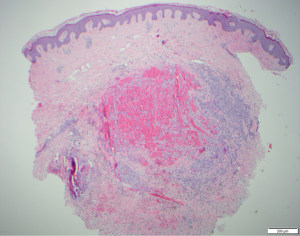 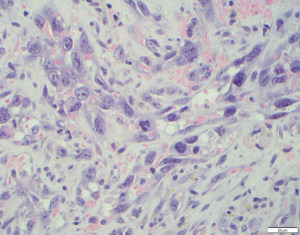 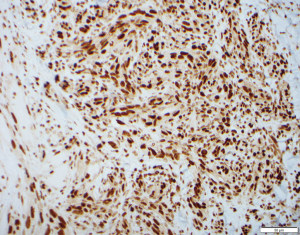 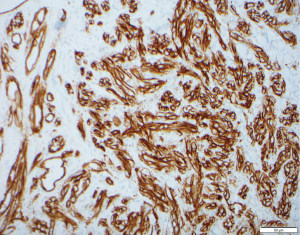 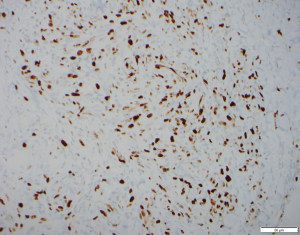 Positron emission tomography of the patient revealed inguinal, retroperitoneal, liver, and mediastinal metastases (Figure 7). Next generation sequencing showed no targetable treatment options and programmed death ligand-1 (PD-L1) immunohistochemistry staining revealed focal positivity in less than 5% of tumor cells suggesting likely no benefit from immunotherapy. After consideration of her extensive comorbidities and poor prognosis, she elected for palliative management. The patient is now deceased.

All procedures performed in this study were in accordance with the ethical standards of the institutional and/or national research committee(s) and with the Helsinki Declaration (as revised in 2013). Written informed consent was unable to be obtained from the patient for publication of this case report and accompanying images due to her being deceased prior to the compilation of this manuscript. Efforts were taken by all of the authors to not include any identifiable information regarding the patient within this manuscript.

The emergence of angiosarcoma related to a state of chronic lymphedema has been recognized since the initial presentation and description of six cases of lymphangiosarcoma occurring in the setting of lymphedematous limbs postmastectomy by Dr. Fred Stewart and Dr. Norman Treves in 1948. Their case report revealed the emergence of a distinct neoplasm within a chronically edematous limb and highlighted the absence of recurrence of the primary breast carcinoma (3). As the development of angiosarcoma in states of chronic lymphedema has become more recognized, the mechanism of oncogenesis within the edematous state continues to be studied with the exact mechanism yet to be elucidated.

The initial postulation of Stewart and Treves was of a systemic carcinogen which acted as the driver to development of multiple distinct neoplasms (3). This has not been proven, but work utilizing both human studies and animal models has pointed to the lymphedematous state and the subsequent multimodal immunologic cascade as creating an environment of local immunosuppression which likely allows for neoplastic development. Local immune dysfunction in states of chronic lymphedema was first presented in 1960 by Stark et al. with their publishing of findings of skin homografts persisting longer in anatomic areas where lymph nodes had been surgically ablated as compared to the control sites where the lymph nodes were kept intact (4). Further investigation revealed impairment of cell-mediated immunity in the presence of lymphedema as revealed first in 1982 with the work of Ruocco et al. who showed diminished skin reactions in an edematous limb as compared to the unaffected limbs when challenged with common antigens in the lower extremity of a patient with Stewart Treves syndrome (5,6). Subsequent work by Mallon et al. investigated the dysfunction of cell-mediated immunity in women with a limb affected by lymphedema postmastectomy. Thirty-five women took part in the study and were challenged with dinitrochlorobenzene in both edematous and non-edematous limbs to assess the sensitization to the chemical and the elicitation of a contact dermatitis. It was revealed that both the afferent (sensitization) and efferent (elicitation of dermatitis) pathways were decreased in the limbs affected with lymphedema as compared to the non-edematous limbs (7).

Recent research continues to reveal the complex interplay of immune cells in the setting of lymphedema leading to local immune dysfunction. It has been shown that neutrophils, dendritic cells, mature helper T cells, and regulatory T cells are all increased in lymphedematous tissues (8) with additional work by García Nores et al. showcasing the importance in increased regulatory T cells in the area of lymphedema. Their work revealed that increased regulatory T cells leads to dampening of chronic inflammation and decreased humoral immunity by observing decreased antibody production in mice with damaged lymphatics when immunized against a T-cell dependent antigen. Their work additionally revealed that in mice post axillary lymph node dissection, depletion of regulatory T cells leads to increased activation of dendritic cells in tissues distal to the site of lymphatic injury and corresponding increases in populations of dendritic cells and activated T cells within the lymph node closest to the site of injury (9). These immunologic changes within the local area of lymphedema are believed to allow for a state of decreased immunologic surveillance within a concurrent setting of chronic inflammation hallmarked by increased local levels of cytokines, in particular interleukin (IL)-6 expressed by macrophages (10). The presence of chronic inflammation with decreased immune surveillance allows for an environment susceptible to neoplastic change.

An aggressive neoplasm arising from vascular or lymphatic endothelial cells (11), angiosarcoma presents early as a subcutaneous mass and can progress to violaceous nodules or plaques that can ulcerate and bleed. In Stewart-Treves syndrome, these lesions are superimposed on a background of chronic skin changes induced by lymphedema that may include edema, atrophic skin, hyperkeratosis, or changes in skin pigmentation (1,2). The patient in the case described above had skin changes characteristic for lipodermatosclerosis with indurated erythematous plaques on bilateral lower extremities.

Stewart-Treves syndrome is diagnosed through clinical presentation, histology, and immunohistochemical analysis. On histology there are vascular channels that run through dermal collagen with pleomorphic epithelioid tumor cells projecting into the lumen of these vessels. On immunohistochemistry the stains CD31, CD34, FLI-1, von Willebrand factor, and factor VIII may be diagnostically useful (1). The differential diagnosis of Stewart-Treves syndrome includes Kaposi’s sarcoma, metastatic carcinoma, other vascular neoplasms, and pyogenic granuloma.

Overall prognosis is poor as an estimated 20–40% have metastasized at the time of diagnosis (12,13). Patients who elect for palliative care typically only live 5–8 months after diagnosis (2). Aggressive surgical treatment for localized disease is the standard of care and may be curative. Chemotherapy, radiation therapy, or immunotherapy have been utilized as adjuvant treatment options in metastatic disease, but their efficacy has yet to be well supported (2,14). The newer advent of immunotherapy has sparked investigation into utilization of programmed death-1 (PD-1) or PD-L1 targeted therapies which has shown promising outcomes with various neoplasms, though their utilization in angiosarcoma has not been well established (11). Few studies have investigated the efficacy of immunotherapy in angiosarcoma, those that have however show the variability in the presence of PD-1 immune cells or PD-L1 tumor cells available for targeting (11,15). An isolated case report by Xu et al. describes a patient with a primary splenic angiosarcoma who was able to obtain a complete remission with combination therapy of PD-1 and vascular endothelial growth factor (VEGF) tyrosine kinase inhibitors (16). This will continue to be an emerging front of research.

Due to the lack of targeted treatment options, early detection is critical to prevent progression of this aggressive neoplasm. Providers need to be aware of concerning findings on examination of a patient with lymphedema, regardless of the etiology of the lymphedema. Timely biopsy or referral to dermatology must occur to increase the patient’s potential for remission. The utilization of next generation sequencing and immunohistochemistry should additionally be considered in order to identify a susceptible target via chemotherapy or immunotherapy.

The views expressed in this manuscript are those of the authors and do not reflect the official policy or position of the Department of the Navy, Department of Defense, or the U.S. Government.

Reporting Checklist: The authors have completed the CARE reporting checklist. Available at https://amj.amegroups.com/article/view/10.21037/amj-22-16/rc

Conflicts of Interest: All authors have completed the ICMJE uniform disclosure form (available at https://amj.amegroups.com/article/view/10.21037/amj-22-16/coif). The authors have no conflicts of interest to declare.

Ethical Statement: The authors are accountable for all aspects of the work in ensuring that questions related to the accuracy or integrity of any part of the work are appropriately investigated and resolved. All procedures performed in this study were in accordance with the ethical standards of the institutional and/or national research committee(s) and with the Helsinki Declaration (as revised in 2013). Written informed consent was unable to be obtained from the patient for publication of this case report and accompanying images due to her being deceased prior to the compilation of this manuscript. Efforts were taken by all of the authors to not include any identifiable information regarding the patient within this manuscript.