Are the benefits of beta blockers in cirrhotics only related to decreased portal hypertension?

Liver cirrhosis remains a leading cause of death worldwide. Non-selective beta blockers (NSBB) have played a key role in the treatment of portal hypertension since Lebrec’s pioneering observations that propranolol significantly reduces portal pressure in patients with cirrhosis (1). At first, the reduction in portal pressure was ascribed to a reduced splanchnic blood flow as a consequence of a demonstrated lowered cardiac output. However, further studies demonstrated that the portal hypertensive state is maintained despite the formation of collaterals because of splanchnic vasodilatation and increased portal venous inflow, the so called hyperdynamic circulation (2). NSBB are known to be more effective in patients presenting with clinical significant portal hypertension (CSPH, i.e., an HVPG >10 mmHg) in which the hyperdynamic circulation is more pronounced (3). In portal vein ligation models it was furthermore shown that the portal pressure lowering effect of both propranolol and nitrate was counteracted by a significant elevation of portal-collateral resistance seemingly preventing hypoperfusion of splanchnic tissue (4), explaining why beta blockers are less effective in patients with varices (3).

The clinical efficacy of propranolol and other NSBB has now been established in either the prevention of first variceal hemorrhage or in the prevention of recurrent variceal hemorrhage (5). Either NSBB or ligation is recommended to prevent first variceal bleeding while the combination of NSBB plus ligation is recommended to avoid recurrent variceal bleeding. Notably, ligation is only effective in combining it with NSBB. Evidence in a meta-analysis shows that NSBB therapy alone is almost as effective as combination therapy in preventing re-bleeding with a tendency to decrease mortality (6). Moreover, NSBB-associated decrease of portal pressure has not only been linked with a reduced incidence of variceal hemorrhage but also with a decreased risk to develop other complications of cirrhosis such as ascites and encephalopathy and, consequently, improved survival (7,8). Meta-analysis of 12 RCTs on the secondary prophylaxis of variceal hemorrhage showed a significant reduction in both re-bleeding and death in NSBB-treated patients with more progressed liver disease but no survival benefit was observed in those with milder disease (9). It thus appeared that sicker patients may derive more benefits from NSBB generating a more complex view on the local and systemic actions of NSBB ultimately affecting survival (see Figure 1). 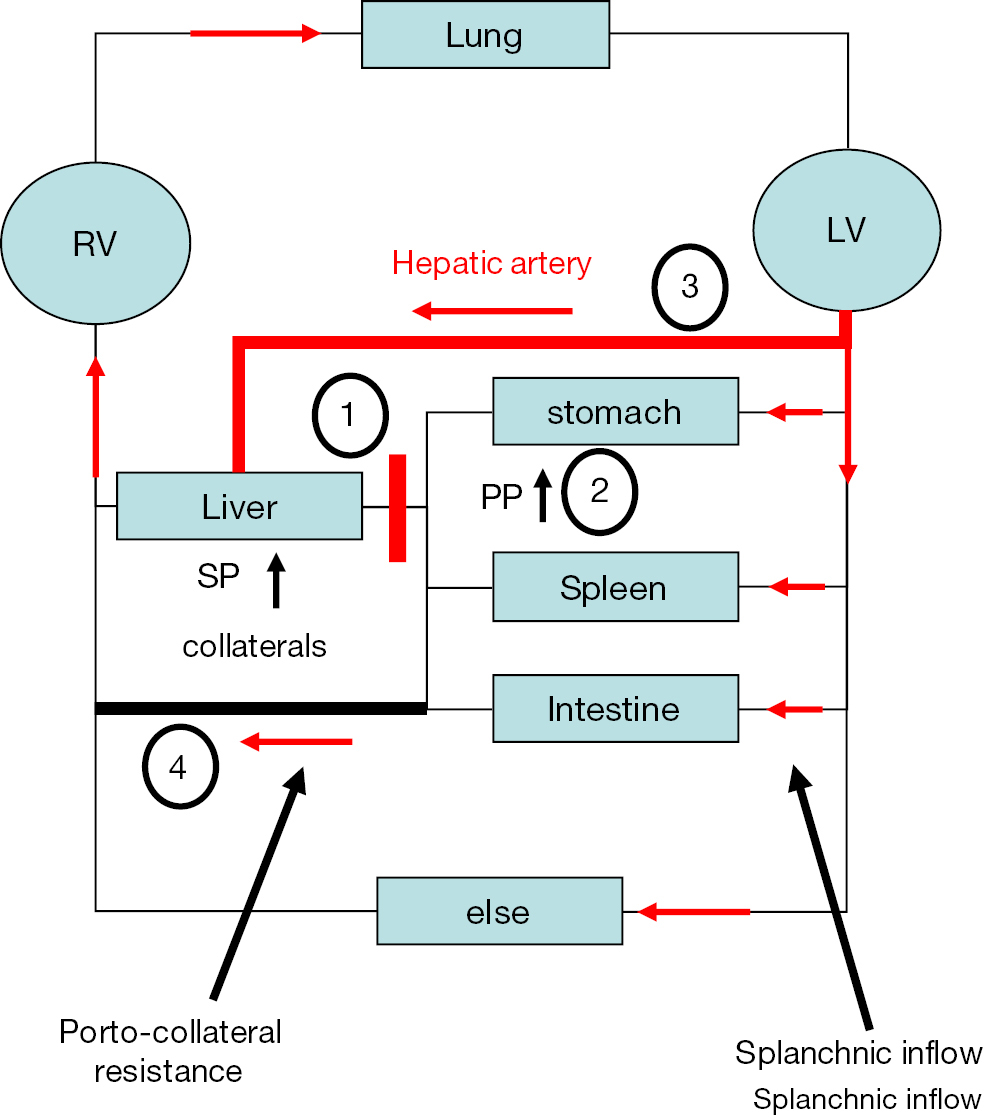 More confusion was caused when it was shown that propranolol use was associated with a higher mortality (11,12). These studies also led to the ‘‘window” hypothesis that proposed that the window for use of NSBB closes once the patient develops ‘‘further” decompensation such as refractory ascites (13). New optimism for beneficial effects of NSBB on survival has recently been created by three independent studies (14-16) the latter showing an association between short-term survival with NSBB therapy and a significant reduction in inflammatory markers [7]. Very recently, Sinha et al. (17) studied for the first time whether long-term, low dose carvedilol therapy influences mortality in established cirrhosis with ascites. The data highlight two important points. First, long-term use of low dose carvedilol in cirrhosis with ascites was associated with a reduced risk of mortality. Second, this association depended on the severity of ascites. While carvedilol therapy was associated with decreased risk of death in mild ascites it did not affect the outcome of those with moderate or severe ascites. Importantly, even in the presence of severe ascites, carvedilol therapy was not associated with excess mortality.

Carvedilol is a nonselective beta blocker/alpha-1 blocker belonging to the third generation of beta blockers. Carvedilol blocks the beta receptors on heart muscle and other cells, making them more relaxed and less responsive to stress hormones. In addition, it also inhibits alpha receptors on blood vessels, dilating them, ultimately lowering blood pressure and vascular resistance. It was originally used for treating mild to severe congestive heart failure and high blood pressure. The strong acute pressure lowering effects on portal hypertension were first reported in 1996 (18). Carvedilol has been associated with a greater reduction in portal pressure than propranolol (19). Additionally, the use of carvedilol has been shown to reduce portal pressure in those who initially failed to respond to propranolol (19). Its action on alpha 1 receptor reduces porto-collateral resistance, and its effects on hepatic stellate cells diminished intrahepatic resistance (20). In a rodent model of liver injury, carvedilol has been reported to mitigate the development of fibrosis by modulating inflammatory cytokines and enhancing antioxidant response. However, the safety of carvedilol and other NSBB in cirrhosis with ascites has been questioned (11) and it was associated with increased mortality most likely due to exacerbation of arterial hypotension and the vasodilatory effects from the concomitant alpha-blockade.

The present study by Sinha et al. (17) comprised 264 patients. Importantly, the authors used a rather low treatment dose of max. 12.5 mg which had been earlier shown to cause a marked reduction in portal pressure without significantly altering the mean arterial pressure (21). In the present study, this reduced carvedilol dose was associated with a reduced risk of death over a median duration of 49 months. The estimated survival throughout the follow-up period was favourable with carvedilol. Indeed, the survival at one-year was 78% for carvedilol and 65% for non-carvedilol despite the similarities in baseline UKELD score. The groups were also similar with regards to liver disease severity, etiology of liver disease and the degree of ascites. What could then explain the disparities between this study and that of the recent meta-analysis? For instance, the study by Sinha et al. comprised all grades of ascites rather and not only refractory ascites. Indeed, the impact of carvedilol decreased with increasing severity of ascites which is consistent with the ‘therapeutic window hypothesis’ which stipulates that NSBB therapy may be effective only within a particular clinical window of advanced liver disease (13). Nevertheless, it remains unclear why carvedilol is beneficial for survival and no differences with regard to variceal bleed related mortality were found between the two groups.

Potential other protective reasons could be long-term effects of portal pressure lowering on ascites related complications such as bacterial translocation, anti-inflammatory effects or direct anti-fibrotic interferences. As shown in Figure 2, the recently introduced sinusoidal pressure hypothesis (SPH) could provide a further attractive link to better understand the favorable effects of Carvedilol on survival (10). SPH has been mainly derived from recent studies on liver stiffness (22). It identifies an elevated sinusoidal pressure as major cause of fibrosis. According to the SPH, an elevated sinusoidal pressure is the major upstream event that initiates fibrosis via biomechanic signaling by stretching hepatic stellate cells. In contrast to conventional views, pressure is seen as a major driving force of fibrosis progression. Elevated arterial flow and finally arterialization of the cirrhotic liver represents the self-perpetuating key event exposing the low-pressure-organ to pathologically high pressures. According to SPH, long term lowering of sinusoidal pressure would generally lower the progression of fibrosis by inhibiting biomechanical signaling in stellate cells and it could explain previous studies on stellate cell modulation by carvedilol. Moreover, our group could recently demonstrate that drastic elevation of arterial pressure was sufficient to induce liver stiffness in non-cirrhotic livers where stiffness corresponds to sinusoidal pressure (23) (see also Figures 1 and 2). The increase of LS was more pronounced in a rat model of liver fibrosis and could significantly be lowered by glycerol nitrate. This study highlights the importance of the arterial blood pressure in cirrhotic livers which are predominantly supplied by the hepatic artery. Using real-time pressure measurements, this study also demonstrated that arterial pressure and hepatic arterial blood supply is the major driving force of elevated liver stiffness in response to catecholamines while portal pressure followed with a latency of several seconds (24). 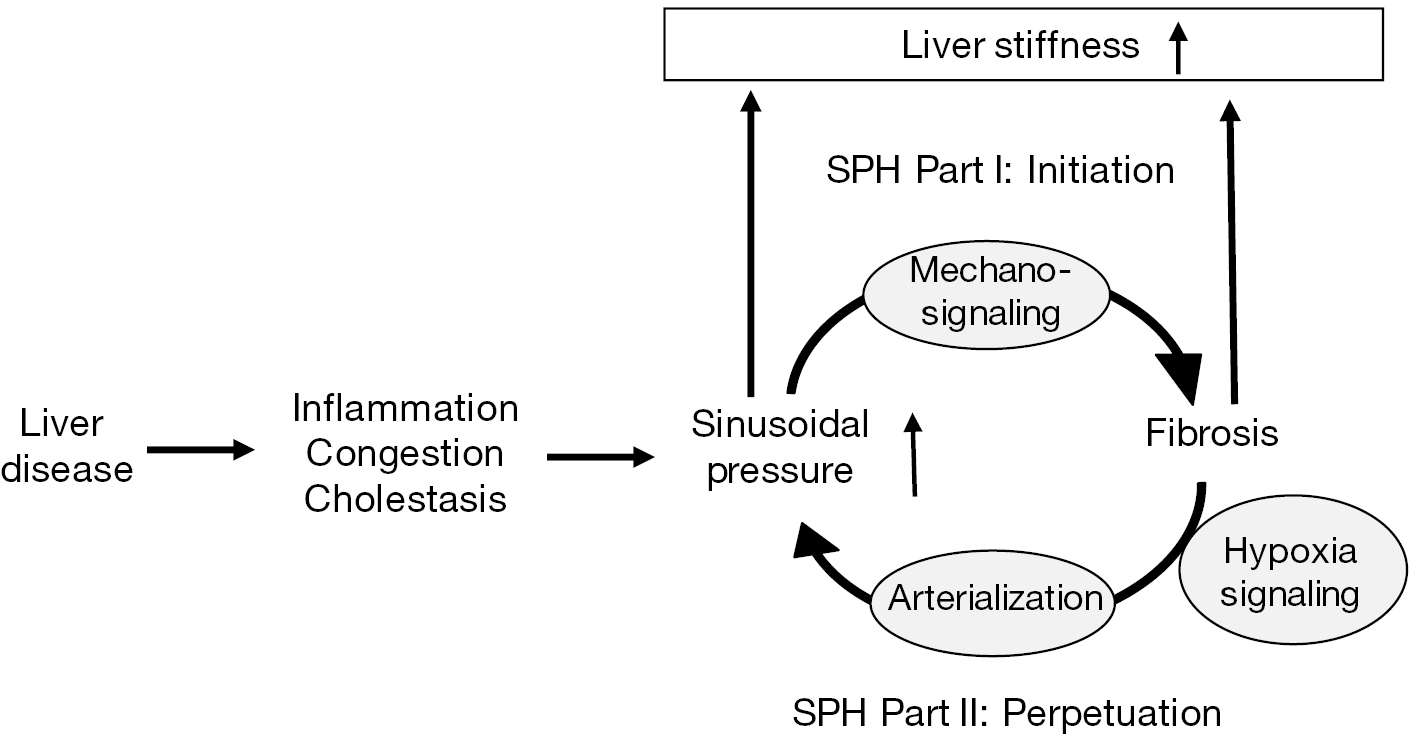 Thus, in this context, the study by Sinha et al. could be a first indication for an individualized approach to modulate pressure in patients with liver cirrhosis despite its limitations such as the retrospective character of the study, potential bias in evaluating the degree of ascites severity solely based on radiology reports and missing reliable information on the clinical course of ascites and safety of carvedilol in patients with refractory ascites namely the concomitant use of diuretics and paracentesis. However, the data are significant and encouraging. What should be the next steps? One limitation of such studies is the complexity of invasive pressure measuring studies. Moreover, most studies simply rely on the wedged pressure overlooking the fact that this may not always correspond to portal pressure (10,25). This becomes evident in patients with manifest cirrhosis and complete reversal of the portal flow showing a so called hepatofugal flow (25). These patients may represent a fraction of up to 7% in patient cohorts with cirrhosis. The wedged pressure is higher than portal pressure in these patients due to complete arterialization (10,25). The discrepancy between wedged and portal pressure may explain some confusions in the literature. For instance, Kroeger et al. showed that propranolol significantly decreased mean arterial pressure and portal pressure but both pressures were not significantly correlated with each other (4). This may be related to the fact that not the ‘real portal pressure was assessed’ and that the portal pressure is not only defined by the splanchnic/systemic inflow but also the outflow through porto-venous collaterals with changing resistance (see Figure 1). In addition, the role of the so called hepatic arterial buffer response is normally not assessed in most studies (10).

All these events will ultimately initiate a vicious cascade of events in cirrhotics as follows (see Figure 1): initially, the liver disease increases liver stiffness and hepatic vascular resistance. Next, increased hepatic resistance will (I) cause increased hepatic arterial flow to maintain hepatic perfusion and (II) portal hypertension. Besides the complications of portal hypertension such as bleeding, it will also cause the formation of porto-venous collaterals with two other important consequences: First, functional liver mass is bypassed leading to impaired liver function and, second, the total blood circulation will be shunted with useless energy loss and further aggravation of the hyperdynamic blood circulation. Taken together, it appears that cirrhosis finally triggers a cascade of events that counteract each other comparable to braking and accelerating a car at the same time. Consequently, future medical measures should be designed to identify the various counter-regulatory measures in an individual patient and apply personalized counter-measures using the appropriate drugs. It is easily conceivable that drug application should be patient and liver disease stage dependent. Thus, single dose studies to all patients are most likely to fail. One potential solution could be the use of novel non-invasive approaches such as transient elastography to measure liver and spleen stiffness. According to first considerations (10), LS seems to measure the sinusoidal pressure plus the degree of fibrosis while spleen stiffness correlates excellently with portal pressure. Since it is easy to perform and quite examiner-independent, this noninvasive approach could also lead to new strategies to identify patients or NSBB dose that is most effective. As summarized in Figure 1, the goal for the next decade should be to better understand (I) the role of the systemic circulation (II) the role of the hepatic arterial buffer response and (III) to monitor the hepatic perfusion and sinusoidal pressure. Another possibility could be the application of single provocative drug tests and measure the response of non-invasive markers such as liver stiffness e.g., after short term carvedilol intake.

The window has indeed opened wide again. Besides the ideas proposed herein, good prospective randomized and controlled multicenter trials will be required to clarify the effects of carvedilol in combination or in comparison to other NSBB or vasoactive compounds. A new fruitful era of clinical hepatology seems to appear at the horizon.