Modelling the deposition of fine particulate matter (PM2.5) in the human respiratory tract

In general, particulate matter (PM) or suspended particulate matter (SPM) includes microscopic particles of liquid or solid matter, which are suspended in the atmosphe­re. These particles can originate either from natural or from anthropogenic sources (1-4). From a physical point of view, PM can be further subdivided into inhalable coarse particles, including particulate objects with a diameter between 2.5 and 10 µm (PM10), fine particles exhibiting a diameter of 2.5 µm or less (PM2.5), ultrafine particles and soot (5-10). In medical respects, all kinds of airborne particles are classified by the IARC and WHO as Group 1 carcinogens (11), whereby most harmful particulates have the ability to penetrate into deep lung regions, where they may reach the blood capillaries unfiltered. This phenomenon, however, may cause heart attacks, respiratory diseases, and premature death (12,13). In 2016, worldwide exposure to PM2.5 contri­buted to more than 4 million deaths from heart disease and stroke, lung cancer, chronic lung disease, and respiratory infections (14). In total, ambient particulate matter occupies the sixth position among the leading risk factors for premature death globally (15).

Basically, the size of inhaled PM represents the main determinant of where in the respiratory tract highest deposition of particles will take place. Whilst larger particles are already filtered in the nose and the throat, particles smaller than 10 µm can settle in the bronchi and respiratory regions of the lungs (12,13,16-18). Fine particulate matter adopting sizes less than 2.5 µm tends to penetrate into the gas exchange region, whereby smallest components of this inhaled aerosol (PM0.1) may pass the epithelial and subepithelial barriers of the lungs and may affect other organs (19-22). Particles measuring less than 100 nm among other include the so-called Diesel Particulate Matter (DPM). This combustion-derived material, however, is characterized by a large surface area, which allows the adsorption of great amounts of carcinogens (19,23). Medical studies among other could demonstrate that increased uptake of PM2.5 causes high plaque deposits in arteries, resulting in vascular inflammation and atherosclerosis (24). Long-term exposure to fine particulate matter leads to a 13% enhanced risk of heart attacks (25). In 2005, the World Health Organization (WHO) estimated that PM2.5 has to be made responsible for 3% of mortality from cardiopulmonary disease, 5% of mortality from cancer of the trachea, bronchi, and central lungs, and 1% of mortality from acute respiratory infections in children under 5 years, worldwide (13,14,26).

From the detailed explanations made above it can be doubtlessly concluded that PM2.5 may be associated with a multitude of diseases, for what reason precise knowledge of its transport and deposition behaviour in the human respiratory tract is indispensable. Here, theoretical models offer valuable support to continuously increase this level of information. In the present contribution, deposition of PM2.5 taken up into the lungs of different probands (5 years, 10 years, 15 years, and adults) is subject to a detailed theoretical description. Thereby, particles adopting diameters of 100 nm, 0.5 µm, 1.0 µm, 1.5 µm, and 2.0 µm are included into the study.

The hypothetical investigation may be regarded as innovative and necessary insofar as:

Simulation of particle deposition in the human respiratory tract

The theoretical approach to PM transport and deposition in the human airways and alveoli was carried out by assuming (I) a stochastic structure of the lung with related intrasubject variability of specific geometric parameters (airway length, diameter, branching angle) in each airway generation, (II) particle transport according to a random walk algorithm, where inhaled objects pass different bronchial paths on their way through the lung, and (III) deposition of particles according to well-defined mechanisms (Brownian motion, inertial impaction, interception, gravitational settling). Construction of the stochastic lung architecture was realized by targeted application of probability density functions of the geometric parameters noted above, from which specific values were selected by means of the random number concept (27-30). Hence, the tracheobronchial tree was assembled airway generation by airway generation. Random particle paths were generated by calculation of local probabilities for the entrance of a particulate object into the left and right daughter tube at each airway bifurcation. These probabilities among other depended upon the cross areas of the daughter tubes, the bifurcation angle, and the velocity of the inhaled air stream. Statistical processing of the transport events took place with the help of the Monte Carlo method, where a high number of particles (e.g., 10,000) was inserted into the tra­cheo­bronchial tree (27-30). Computation of bronchial and alveolar particle deposition was realized by application of well-validated analytical and empirical formulae for the single deposition mechanisms (27-37). In order to increase the efficiency of the statistical calculations, the mathematical technique of statistical weights was used. This allows the simulation of multiple deposition events for a single particle, whereby after each collision between particle and airway/alveolar wall the statistical weight is reduced by a certain amount (27-30).

Besides total deposition of PM2.5 denoting the overall accumulation of particles in all parts of the respiratory tract also regional (i.e., tubular and alveolar) deposition as well as generation-by-generation deposition was modelled and subjected to a graphical evaluation. 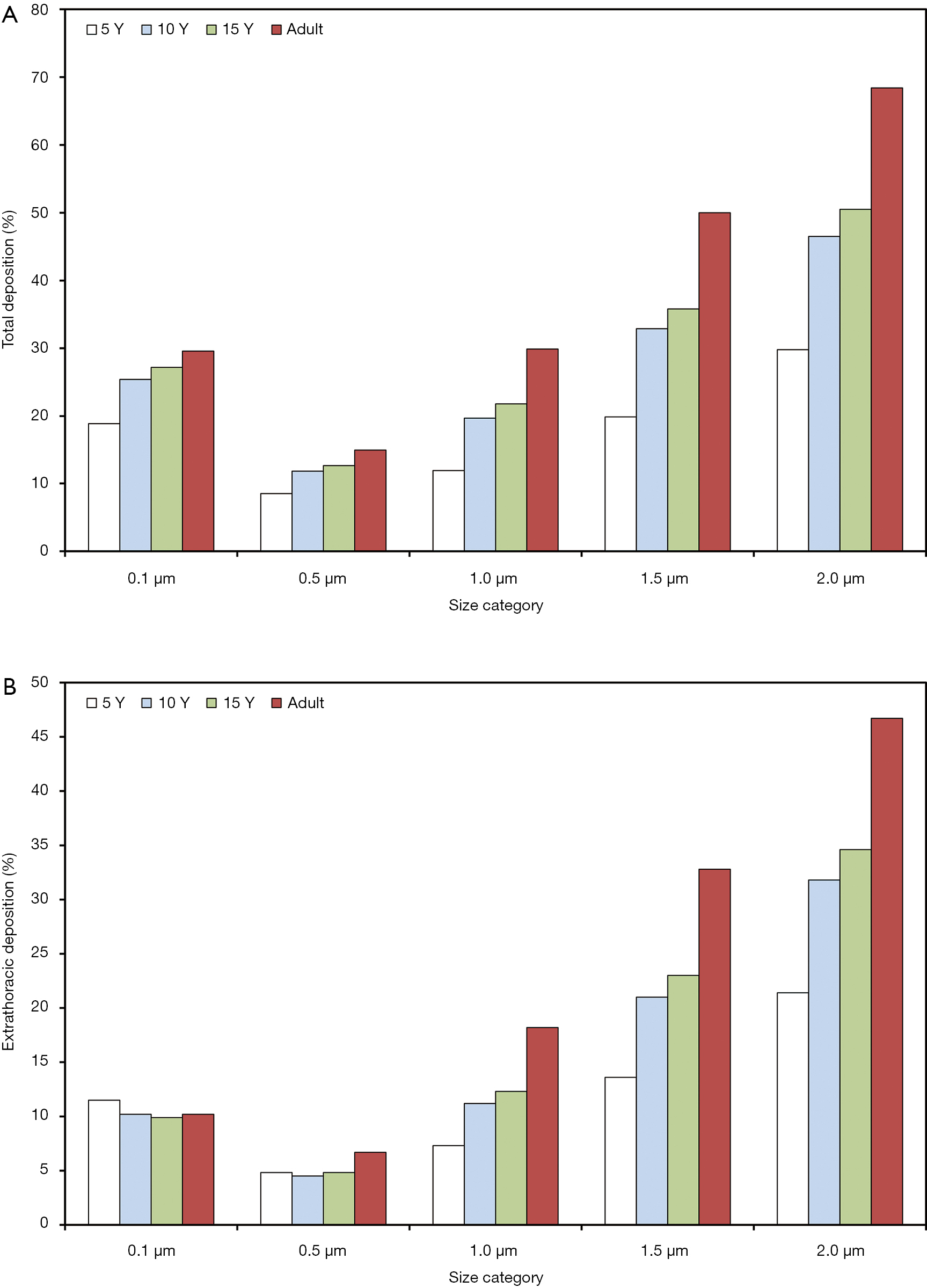 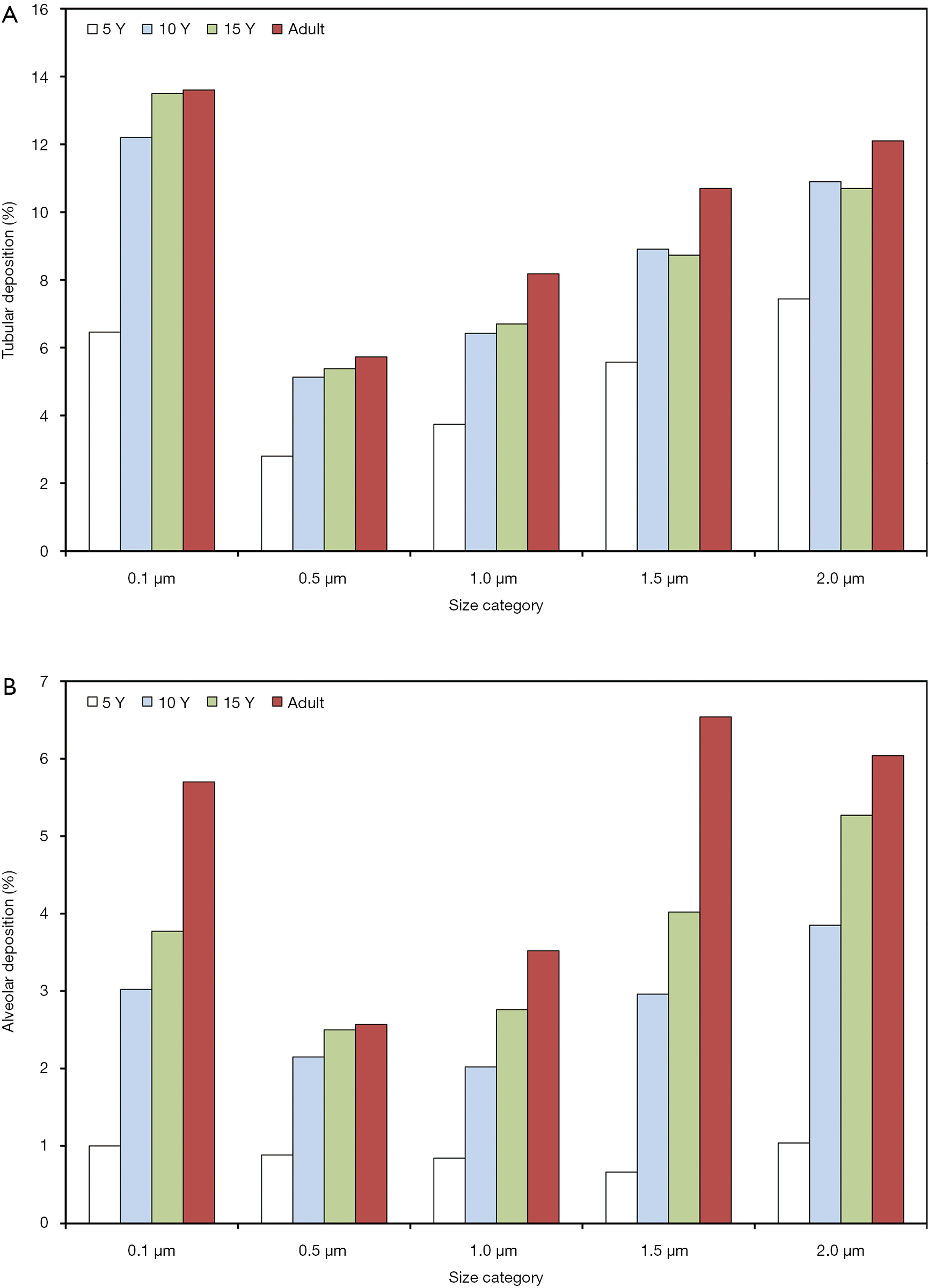 With regard to local (i.e., airway generation-specific) deposition of fine particulate matter, age-related trends are not pronounced in such an unequivocal manner as reported for total and regional deposition. As exhibited in Figures 3,4, local deposition is generally subject to a remarkable decrease from 0.1 µm particles to 0.5 µm particles, but with growing particle size it undergoes a significant enhancement, again. Whilst smallest particles show a continuous increase in deposition with proceeding airway generation, largest particles are mainly accumulated in the upper and central airways, resulting in lower deposition values in the peripheral structures of the respiratory tract. Whilst in the upper and central airway generations young probands (5 and 10 years) commonly produce higher particle depositions, in the peripheral airway generations this behavior is completely turned around with higher deposition rates in adults. In general, particles measuring 0.1 µm in size deposit by 0.067% (generation 1, 5 years) to 1.15% (generation 15, adult), whereas 0.5 µm particles show deposition values between 0.047% and 0.455%. Particles adopting a diameter of 1.0 µm are characterized by a local accumulation ranging from 0.098% to 0.556% and particles with a diameter of 1.5 µm by an accumulation of 0.173% to 0.768%. Finally, particles measuring 2.0 µm in size show a local deposition varying between 0.265% and 0.855% (Figure 3A,B, Figure 4A,B). 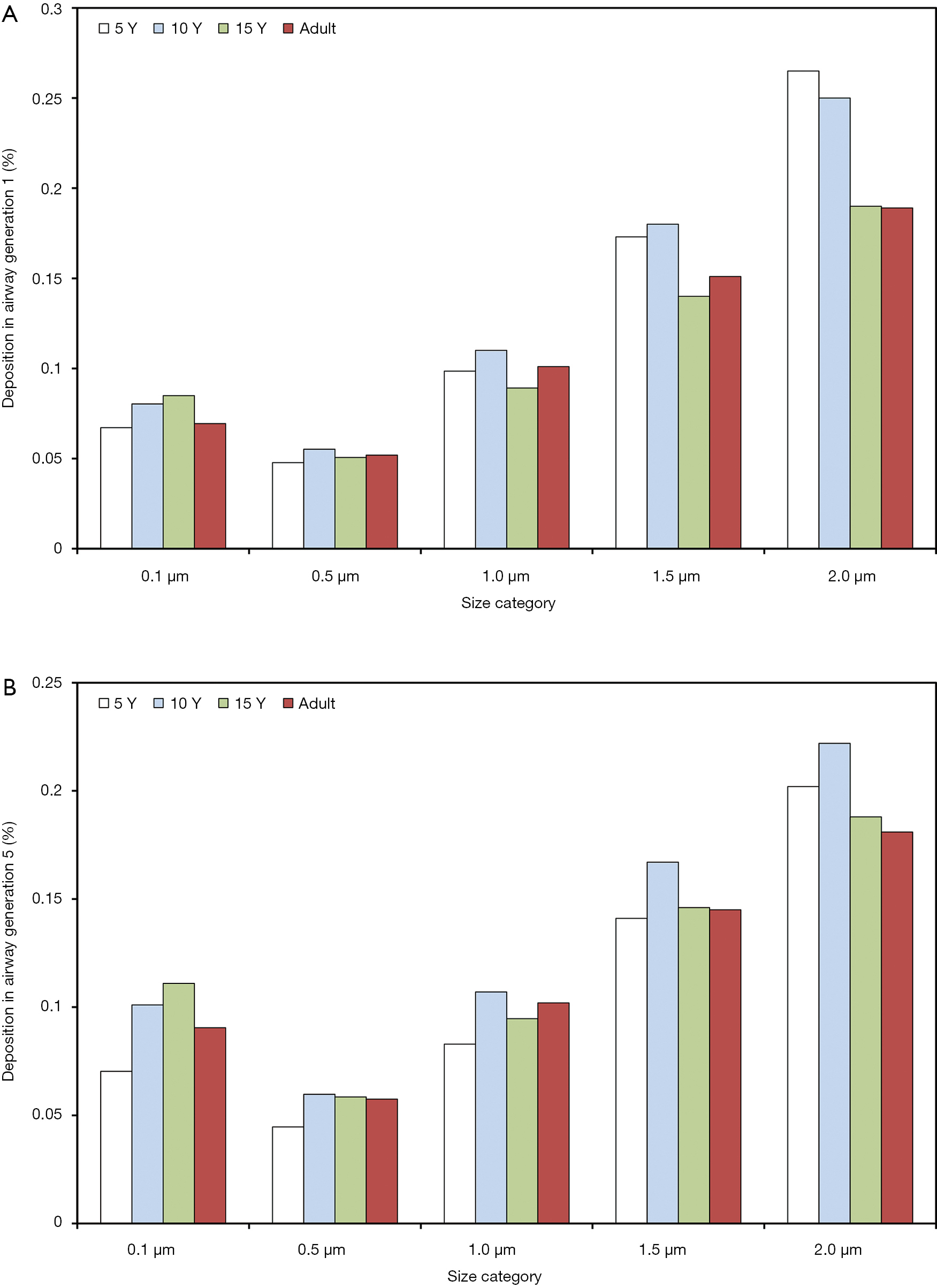 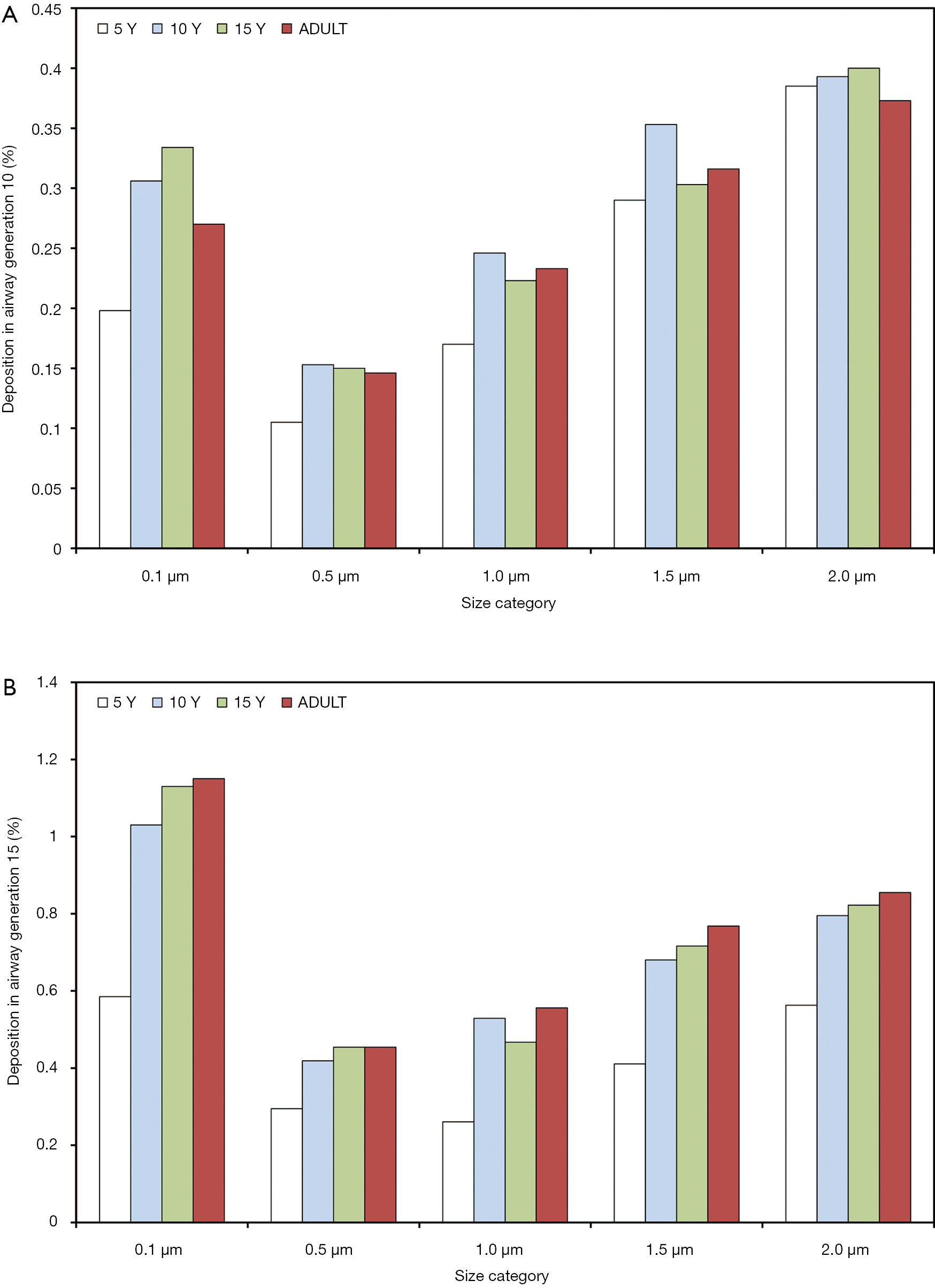 According to the modelling results fine particulate matter exhibits a specific deposition behavior in the human respiratory tract. Under sitting breathing conditions, total and regional accumulation of PM2.5 depends on (I) the size of single particulate components and (II) the age of the probands inhaling such particles from the am­bient air. As computed by the theoretical model, the relationship between deposition fraction on the one hand and particle size on the other can be best described by a U-shaped function with high deposition probabilities occurring for smaller and larger particles and lower probabilities being recognized for intermediately sized particulate objects (27-38). This size dependence of particle deposition, which is also observed for different components of PM2.5, can be considered as result of the circumstance that small particles (<100 nm) mainly undergo a diffusion-controlled settling in the airways and alveoli, whereas large particles (>1.0 µm) are preferentially subject to mass-related deposition phenomena such as inertial impaction and sedimentation. Particulate objects ranging in size between 100 nm and 1 µm, however, offer a minimal working surface for any deposition mechanism, because they are too large for effective Brownian motion, but too small for mass-related phenomena. Hence, deposition of such particles adopts significantly lower values (27-38).

It could be demonstrated that total and regional deposition of variably sized particles belonging to PM2.5 undergoes a continuous increase with proceeding age of the probands. This means that particles are more effectively deposited in adults than in adolescents and children. The main reason for this highly age-specific deposition behavior is founded on the circumstance that (I) children’s lungs are significantly reduced in size with respect to adults’ lungs and (II) breathing habits of children remarkably differ from those of adults. In general, inhalation of children is characterized by low tidal volumes on the one hand and remarkably shortened duration on the other, which in combination with the reduced lung morphometry results in very shallow breath cycles allowing a minor intrapulmonary penetration of the inspired particles and limiting their residence times in the different lung structures. In adult lungs, the contrary effects can be measured, so that inhaled particles are marked by higher penetration depths and elongated intrapulmonary residence times (35-38). It has to be strictly noted in this context that the considerations noted above are related to one single breath cycle. If a specific time span of particle exposure and a breathing frequency of children being about twice as high as that of adults is assumed, particle deposition in children’s lungs clearly exceeds that in adults’ lungs, so that young probands represent the more endangered age group with regard to the hazardous uptake of PM2.5.

Computation of airway generation-specific particle deposition shows that younger probands possess the ability to filter all kinds of particulate objects in the upper and central bronchial tubes with increased efficiency. Contrary, in adult lungs such particles may penetrate in higher amounts to the more peripheral lung regions, where they finally undergo a respective settling event. The modeling results, however, are characterized by several uncertainties, which mainly result from fluctuations with regard to breathing habits and inhaled air volumes. Basically, the results obtained from the theoretical model predict higher particle masses in the lung periphery of adults than in the periphery of children. This would have severe consequences concerning an age-related risk assessment of PM2.5 and the development of appropriate countermeasures.

Finally, it has to be additionally mentioned that particles of arbitrary size deposited in the bronchial/bronchiolar airways and alveolar structures are subjected to an effective innate defense system including faster and slower processes of bronchial and alveolar clearance (30,39-45). These mechanisms are also characterized by a certain age dependence (44,45), so that all physiological processes associated with the inspira­tory uptake of particles exhibit a certain difference between children and adults.