A ground-glass opacity (GGO) was detected in the medial segment of the right middle lung lobe of a 48-year-old man about one year ago during a regular medical examination. He did not have any symptoms (e.g., chest tightness, shortness of breath, cough, or expectoration) at that time; therefore, we suggested he undergo regular re-examinations. Result of a computed-tomography (CT) scan one month ago still indicated a 0.9-cm GGO in the same position. The patient still had no symptoms. Positron emission tomography-CT showed hypermetabolism in this nodule. The patient’s physical performance was good, and his appetite, sleep, urination, and defecation were normal. His body weight did not change significantly. He denied smoking or alcohol abuse, and family history.

A complete physical examination was performed when the patient was admitted. No abnormity was found. No lymph nodes were palpable in the neck, axilla, or below the clavicle.

Chest CT showed a 1.1-cm elliptic GGO in the right middle lung lobe, with clear margins, without lobulation sign, spiculation or vacuole sign (Figure 1). No abnormity was found in the lung hila. No abnormal lymph nodes were found in the mediastinum. 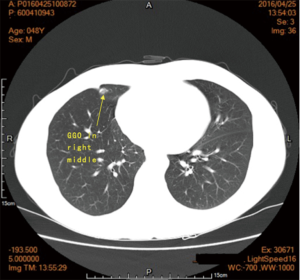 PET/CT showed hypermetabolism in the nodule of the right middle lung lobe.

The results of imaging, including PET/CT, suggested that the GGO was considered to be malignant. The lesion was in medial segment of the right middle lung lobe, near the hilum; therefore, segmentectomy and wedge resection were not suitable. After the preoperative discussion and agreement of the patient, we decided to perform robotic-assisted right middle lobectomy.

The patient was a middle-aged man in generally good condition, without chronic disease, smoking or alcohol abuse, so the preoperative preparation was quite simple. During preoperative education, we described his condition and the surgical method, as well as situations that may occur after surgery. We told him to practice elimination while in bed. We taught him pulmonary function training and how to cough and expectorate after surgery. Eating and drinking are routinely forbidden after 9 pm the day before the operation. 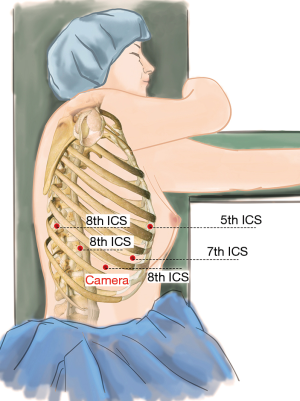 Figure 4 The mediastinal pleura was opened behind the phrenic nerve, exposing the hilum of the right lung. The hilar lymph nodes (No. 10) were removed. 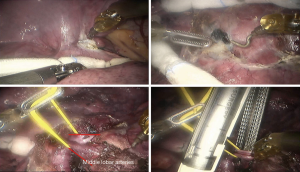 Figure 6 The initial part of the horizontal fissure was opened, and the interlobular lymph nodes (No. 11) were removed. The lateral segmental artery and medial segmental artery were dissociated and transected with a white reload. 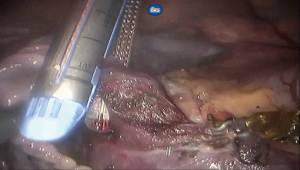 Figure 7 The middle lobe bronchus was dissociated transected it with a blue reload.

Figure 9 The inferior pulmonary ligament was divided to the inferior lung vein level, and the nearby lymph nodes (No. 9) were removed.

Figure 10 The posterior mediastinal pleura was opened to remove the subcarinal lymph nodes (No. 7).

Figure 11 The upper mediastinal pleura was opened to remove lymph nodes near the trachea (No. 2 and 4), azygos vein arch and the superior vena cava. 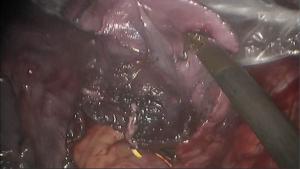 Figure 12 After extending the auxiliary incision to about 4 cm, we removed the resected middle lobe using a specimen bag. A lung cancer, diagnosis was proved by frozen section diagnosis. Bleeding was limited during surgery.

Finally, the thoracic cavity was washed with warm water, and the right lung was ventilated. No air leakage or bleeding was observed. We placed an indwelling 28# thoracic drainage tube and a thoracic micro-tube at 8th ICS and 9th ICS, respectively. Then all incisions were closed.

Pathologic diagnosis was lung adenocarcinoma in situ (1 cm × 0.5 cm × 0.5 cm) with focal micro-invasion. No cancer cells were detected at the bronchial stump or lymph nodes.

Because of the aplasia of fissures and the adhesion of lymph nodes around the vessels and bronchus, right middle lobectomy can be difficult (1). The stability and dexterity of the da Vinci Surgical System make it suitable for this procedure (2). Especially in systematic lymphadenectomy (3), the high-resolution three dimensional view makes it easier to completely remove lymph nodes thoroughly with less injury to nearby tissues.

Appropriate body position and incisions are key points of this surgery. We choose the lateral decubitus position and elevated the chest to make the surgical field clearer (4). After several attempts, we choose these incision locations that make it possible for the camera and robotic arms to cover the entire thoracic cavity. The auxiliary incision should be chosen to be convenient for placing instruments, such as the Endo GIATM and the specimen bag, and to minimize mutual interference between the robotic arms.

Regarding the choice of instruments, we use three arms (5), including a camera lens, a permanent cautery hook and a fenestrated bipolar forceps to meet the need for cutting, dissociation, coagulation, and pickup.

The case was typical, dealing with veins, arteries, bronchus, and fissures successively. However, we should pay attention to potential anatomic variations of these structures. In addition, the assistant should cooperate well with the surgeon and be experienced in thoracoscopic surgery and thoracotomy. In emergency circumstances, such as rupture of the main vessels, the assistant should be able to handle the situation independently under thoracoscopy or even open the chest immediately.

Informed Consent: Written informed consent was obtained from the patient for publication of this manuscript and any accompanying images.