Irrespective of the underlying cause, heart failure (HF) generates an enormous clinical, societal and economic burden. Although some population statistics suggested that the epidemiologic burden of HF may have significantly decreased between 2000 and 2010 (1), this trend could not be confirmed in other continental or nationwide surveys, which showed instead that both the incidence and prevalence of HF may be increasing especially due to a constantly growing proportion of population aged 70 years or older (2-5). Accurate assessment of epidemiologic trends is vital for optimizing healthcare resources allocation in a world still plagued by an unprecedented economic crisis (6). Therefore, in this brief report, we aimed to provide an objective and concise analysis of the worldwide epidemiological burden of HF, providing also an estimation of possible future trends.

An electronic search was performed in the Global Health Data Exchange (GHDx) registry, a large database of health-related data maintained by the Institute for Health Metrics and Evaluation (7), using the keyword “heart failure” [International Classification of Diseases 10 (ICD-10) Code I50] in the category “impairment” combined with “all causes” in the category “cause”. According to the Global Burden of Disease (GBD) Collaborators, HF clinically diagnosed, using structured criteria such as those of Framingham or the European Society of Cardiology (ESC) (8,9). Mild HF was then defined as shortness of breath and fatigue with moderate physical activity such as walking uphill or more than a quarter-mile on level ground (disability weight, 0.041; 95% confidence interval (CI), 0.026–0.062), moderate HF as is shortness of breath and easy fatigue with minimal physical activity such as walking a short distance (disability weight, 0.072; 95% CI, 0.047–0.103), whilst severe HF was defined as shortness of breath and fatigue even at rest (disability weight, 0.179; 95% CI, 0.122–0.251) (10). The years lost due to disability (YLDs) was considered the indicator of disease or risk factor attributable to health loss, reflecting the burden of living with a certain disease or disability. The database search was then combined with the epidemiologic variables “year”, “sex”, “age” and “location” (using “SDI Regions”, where SDI stands for socio-demographic index).

The output of the electronic search was downloaded in comma-separated values (CSV), imported into an Excel file (Microsoft, Redmond, WA, USA) and analyzed with Analyse-it (Analyse-it Software Ltd, Leeds, UK) and MedCalc statistical software (MedCalc Software, Ostend, Belgium). Simple (Pearson’s correlation) regression analyses were used for assessing potential associations (and their relative 95% CI) among different epidemiologic measures, whilst the risk was expressed as odds ratio (OR) and relative 95% CI. The study was performed in accordance with the Declaration of Helsinki and under the terms of relevant local legislation. 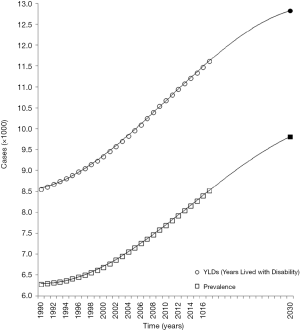 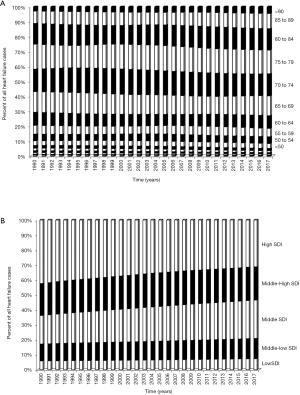 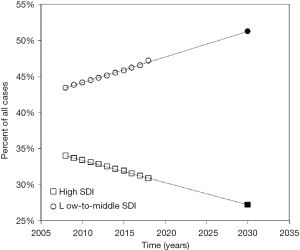 Although evidence has been provided that the epidemiologic impact of HF may have decreased during the past decades (1), more recently published continental or nationwide studies showed an almost opposite trend (2-5). The results of our analysis suggest that both prevalence and health loss (i.e., YLDs) of HF have constantly increased during the past 28 years on a worldwide scale, following a path that is unlikely to reverse in the next 10 years based on our estimations. The recent AHA projections show that the prevalence of HF in the US will probably increase from 2.42% in 2012 to 2.97% in 2030 (11), exhibiting a relative increment of 22.7% that would perfectly overlap the increment of worldwide prevalence predicted by our estimation during the same period of time (7.93 per 1,000 inhabitants in 2012 vs. 9.81 per 100 inhabitants in 2030, +23.7%) (Figure 1). Notably, this increased population burden will then translate into an enhanced worldwide expenditure for managing HF patients, which will reach approximately 400 billion US $ in 2030, thus approximating the gross domestic product of an entire country like Austria, Ireland or Israel. Although the sex distribution of HF has not apparently changed during the last 28 years, with prevalence constantly higher in the female sex and YLDs slightly larger in men, the impact of HF in different age ranges has instead significantly varied, with an ~4% increase in the very elderly population, as possible reflection of worldwide population ageing. This increment has been almost constant and has even sharpened during the last 10 years (+ ~2%; Figure 2A), which would hence lead us to estimate that both prevalence and YLDs will consistently increase over 30% in people aged ≥80 years by the year 2030. Since the higher inpatient costs for managing HF are those resulting from hospital readmissions (12), which are up to 4-fold higher in the elderly (13), it is hence very likely that the epidemic proportion reached by HF in older individuals may consistently amplify the usage of healthcare resource for managing HF in the next 10 years.

The last 28-year trend and the current socioeconomic distribution of HF around the world deserve special focus. Although the burden of HF is still largely prevalent in middle-to-high SDI regions, the recent trend shows that the distribution may soon change (Figure 2B). More specifically, our analysis shows that the burden of HF has increased by 3.1% in the last 10 years in low-to-middle SDI regions (from 43.4% to 46.5% of all worldwide HF cases), which would allow us to estimate that the burden of this condition will overcome 50% by the year 2030, thus reversing the current scenario where HF is more prevalent in middle-to-high SDI countries (Figure 3). This prediction will pose additional challenges, whereby HF in low-income countries is clinically different from Europe and North America and its outcome is dramatically influenced by worse health-care infrastructure availability, as well as by lower care access and quality (14). This will require definition and implementation of highly tailored healthcare measures that may pose a theoretically unsustainable burden on local healthcare systems in these countries (15).

The results of our analysis attest that HF is an emerging worldwide threat whose prevalence and health loss burden are constantly increasing, especially in the elderly and in people leaving in low SDI regions. Urgent interventions shall hence be prioritized and scaled up for targeting the cause of HF and preventing its onset and worsening, as well as for redesigning healthcare access, infrastructure and therapies around this evolving epidemiology.

Conflicts of Interest: Both authors have completed the ICMJE uniform disclosure form (available at http://dx.doi.org/10.21037/amj.2020.03.03). The authors have no conflicts of interest to declare.