In 1968, the first artery-to-coronary anastomosis involving the left internal thoracic artery (LITA) and the left anterior descending coronary artery (LAD) was performed by Dr. Green (1). Since then, the use of this arterial conduit has proven to provide a survival benefit and a reduced risk of repeat revascularization, thereby establishing its status as the standard intervention during coronary artery bypass grafting (CABG) in patients with LAD disease (2-5). The idea of adding other arterial conduits and the conceptualization of multiple (MAG) and total arterial grafting (TAG) came intuitively after the acknowledgment of the benefit associated with the left internal thoracic artery (LITA) coupled with a worse patency rate (50% at 10 years) and outcomes of saphenous vein graft (SVG) (6). The use of more than 1 arterial graft has been reported to overcome long-term recurrence of myocardial ischemia and patency failure.

The first randomized clinical trial (RCT) compared single internal thoracic artery (SITA) with bilateral internal thoracic arteries (BITA) in 162 patients and 81 patients in each arm. Authors concluded that early and 5-year (overall mortality and cardiac event-free survival) outcomes of the 2 groups were equal. Unfortunately, the limited number of patients did not allow for the clinical differences in the 2 arms to be evaluated (7).

In 2009, the results of the Stand-in-Y mammary study (8) were published. This was a randomized controlled trial (RCT) conducted in Italy consisting of 4 arms for a total of 815 patients, and included 2 BITA groups with 2 different methods, 1 SITA plus radial artery (RA) and 1 SITA plus SVG. After a brief follow-up of 2 years, no differences in overall survival were found between the groups, but patients randomized to receive 2 arterial grafts showed a benefit in cardiac event-free survival.

The Arterial Revascularization Trial (ART) (9) was a multicenter, randomized, unblinded trial which enrolled 3102 patients that were assigned to receive either BITA or SITA. Notably, the number of patients to be enrolled was decided in order to detect an absolute 5% reduction in overall survival at 10 years (10). In the intention-to-treat analysis at 10 years, neither the primary outcome, overall survival, nor the event-free survival showed any difference among the 2 groups (HR 0.96; 95% CI, 0.82–1.12). It is worth mentioning that the trial was burdened by a high crossover rate between the 2 arms so that 14% of patients assigned to the BITA group actually received SITA. Also, in the SITA arm 21% of patients received a second arterial graft (RA). Therefore, when an as-treated analysis was carried out, a survival benefit and a reduction in major adverse cardiovascular events were reported in the MAG group (LITA-RA or BITA) versus the single arterial graft group. Several reasons can explain this discrepancy. First of all, the high crossover rate and the frequent use of RA could have both substantially narrowed the difference in clinical outcomes between the 2 groups. In addition, power calculation for the study was based on literature sources dating back to the 1970s and therefore did not take into account the improvements in care of recent years. Additionally, the as-treated analysis remains an observational comparison, and thus selection bias and other confounders might have impacted the results (11).

The adoption of BITA in daily practice is still limited. In 2016, BITA was used in 12–15% and 5.5% of coronary revascularizations in Europe and the USA respectively (20). Current guidelines recommend the use of BITA in patients with no higher risk of sternal wound infection (class IIa) (4), and concerns regarding the use of BITA are most noticeably limiting its valuable use in surgical practice. In particular, the risk of deep sternal wound infection (DSWI) is highly feared in patients with poorly controlled diabetes, chronic pulmonary obstructive disease, previous mediastinal irradiation, and obesity. Sternal complications are mostly due to the reduction in vascularization of tissue surrounding the thoracic artery. Hence, the use of a skeletonized technique to harvest BITA has been shown to reduce the risk of sternal complications compared to pedicled SITA harvesting (21).

Notably, only the Radial Artery Patency and Clinical Outcomes (RAPCO) trial compared RITA and RA in relation to MAG. At the 96th Annual Meeting of the American Association of Thoracic Surgery, the 10-year results of this trial were presented and showed that the use of RA was associated with a benefit in overall survival, whereas the patency rate was similar (24).

The evidence from observational studies comparing RA and SVG was pooled in a recent meta-analysis (25) in which authors found a lower long-term mortality (mean follow-up 6.6 years) in patients receiving RA, but no difference in terms of myocardial infarction, stroke, and operative mortality. Numerous observational studies have been conducted to compare RA and RITA. A meta-analysis showed that late death and repeat revascularization rates were lower in patients treated with LITA plus RA (26).

Recently, an analysis performed on 1,493,470 patients from the Society of Thoracic Surgeons database highlighted that an increase in operative mortality was seen in patients receiving BITA but not in those receiving LITA plus RA. Interestingly, the short- and long-term outcomes for BITA were associated with surgeon experience in a U-shaped volume-outcome relation (27). Another report including 59,432 patients found that BITA led to a higher rate of sternal complications but also revealed an equal survival between BITA grafts and LITA plus RA grafts (28).

The main concerns regarding the use of RA graft are related to the aforementioned extent of stenosis of the target coronary vessel, and the spasm tendency of the RA.

Evidence for the existence of the added value of increased arterial revascularization by using 3 arterial conduits is less abundant.

Thus far, only 2 RCTs have compared total arterial revascularization with conventional CABG. In the first trial, 200 patients older than 70 years were randomized to receive either TAG or LITA plus SVG. The TAG group showed a lower rate of graft occlusion, angina recurrence, new percutaneous revascularization. And new myocardial infarction, whereas the mortality at a mean follow-up of 15 months was not different. The use of SVG was found to be a predictor of recurrent angina and graft occlusion (29). The second trial was a pilot feasibility study involving 58 patients, randomized to either TAG or LITA plus SVG. The results showed no difference in in-hospital mortality, stroke, or DSWI between the 2 groups and no difference in graft patency at 6-month follow-up (30).

On the other hand, a meta-analysis by Yanagawa et al., comprising 130,305 patients, showed that TAG was associated with a significantly longer survival compared with SAG or MAG (31). Similarly, a recent meta-analysis by Urso et al., including 18 studies and comparing the TAG versus the non-TAG approach, demonstrated a long-term survival benefit of TAG (32). Interestingly, their meta-regression showed that the benefit seemed to be greater in patients with diabetes mellitus and in those receiving 3 arterial conduits. Moreover, the TAG approach with BITA was associated with a significantly higher survival than TAG without BITA, but had an increased risk of DSWI.

Interestingly, in a study from the Australian and New Zealand Society of Cardiothoracic Surgeons database, SVG was found to be independently associated with poorer survival up to 12.5 years (33).

A propensity-score matched study of 11,279 patients showed that main in-hospital outcomes (death, stroke, new onset of atrial fibrillation, kidney dysfunction, blood transfusion, and length of stay) were not different between patients receiving 2 arterial grafts and those receiving 3 arterial grafts (18). Also, no difference was found in the incidence of major adverse cardiac and cerebrovascular events or in long-term survival.

In a recent meta-analysis (34) of 8 propensity score–matched studies, which included 10,287 patients, the use of 3 arterial grafts was associated with a long-term survival benefit, with this advantage being independent of the patient’s gender or diabetes mellitus status. Similar outcomes in terms of major adverse cardiac and cerebrovascular events, death, myocardial infarction, stroke, or repeat revascularization were found in a propensity-matched study using a provincial registry in Ontario between patients receiving 2 or 3 arterial grafts (18).

The only RCT comparing percutaneous coronary intervention (PCI) versus CABG performed with more than 1 arterial graft, is the BEST trial (35). Regrettably, the trial was terminated earlier than anticipated due to a slow enrolment. The primary composite endpoint of death, myocardial infarction, and target-vessel revascularization was more frequent in patients undergoing PCI with the use of everolimus-eluting stents than CABG.

A recent network meta-analysis of 25 studies, including a total of 53,239 patients, provided a comparison between MAG and PCI. It found that long-term mortality and need for repeat revascularization were lower in the MAG group while no difference was found in terms of operative mortality and stroke (36). The meta-regression indicated, albeit without significance, that there was a clear trend towards a negative correlation between the number of arterial grafts and the incidence rate ratio for long-term mortality.

The main advantages and disadvantages of multiple and total arterial grafting are shown in Table 1 and Table 2. Abundant evidence is present to support the use of more than 1 arterial graft as a conventional approach in myocardial revascularization. Specifically, observational studies have endorsed this approach although the impact of selection bias on the final results cannot be excluded. There has been a growing interest in the use of propensity-score matched methodology with the aim to control biases related to the observational nature of these studies. Despite this, even the most accurate statistical methodology still cannot address all confounders. As emphasized by Anyanwu and Adams (38), propensity matching is limited when the treatment effect relies strongly on longevity. This statistical methodology does not consider for example “the eye ball test” that is the clinical judgment of physicians deciding to give either a conventional revascularization or a multiple/total arterial revascularization. Another critical point concerns the surgical skills and the experience of the surgeons involved. The authors suggest that heterogeneity in conduit harvesting might be present since SVG harvesting, routinely performed by junior residents or surgeon’s assistants, might involve direct trauma to the vein endothelium and therefore have an impact on graft patency while arterial grafts are usually procured in an atraumatic way by skilled surgeons or surgeon’s assistants. Also, in studies without randomization, the impact of surgeon’s skills is essential, and propensity matching is not able to control it. In a control group for patients usually receiving conventional CABG, grafting is performed by less skilled and/or low-volume surgeons in contrast to patients receiving more demanding arterial grafting, which is performed by highly skilled surgeons who regularly perform that type of surgery. 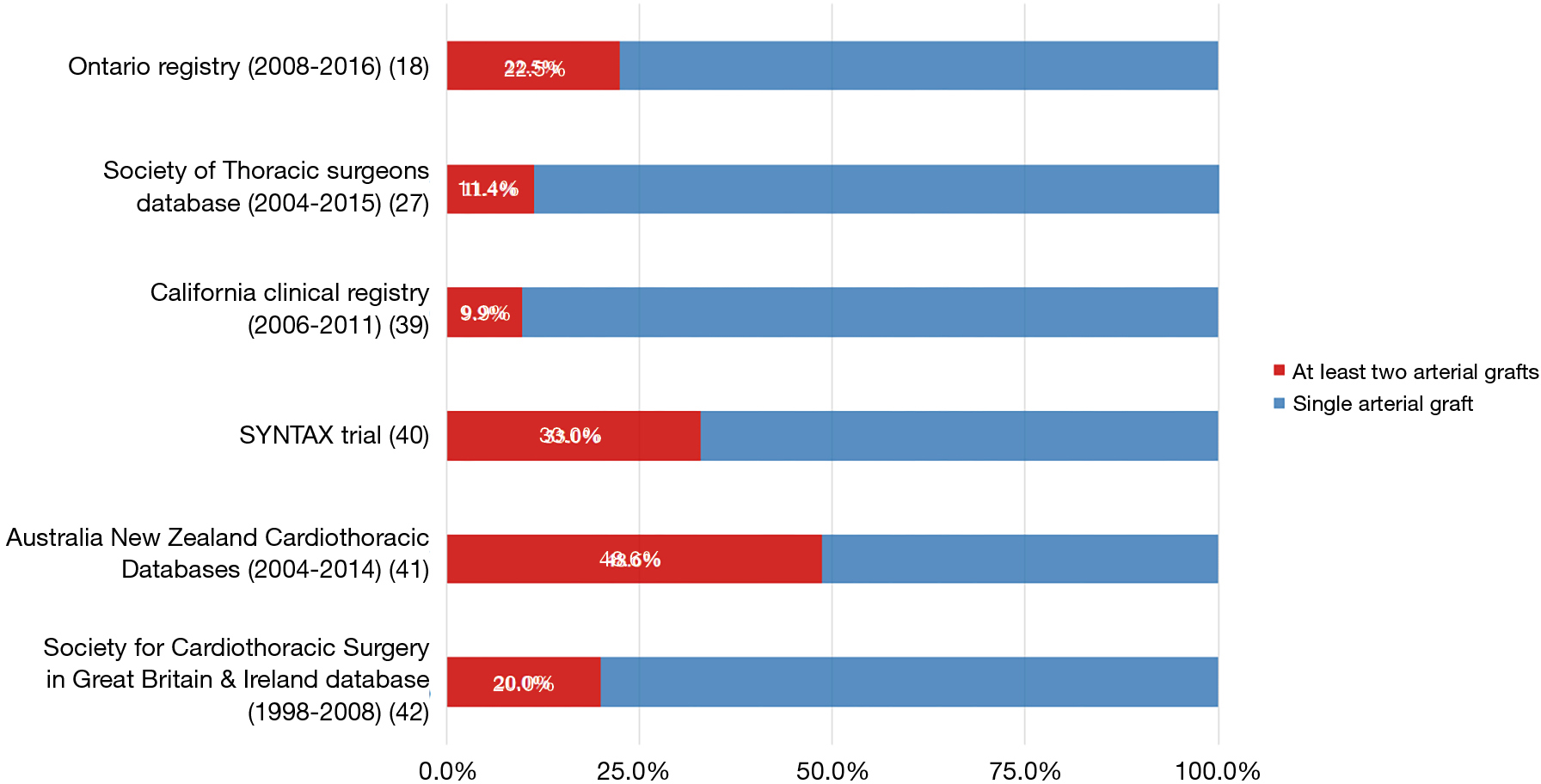 Figure 1 The use of more than one arterial graft for coronary revascularization in different databases.

The Randomized Comparison of the Clinical Outcome of Single Versus Multiple Arterial Grafts (ROMA) trial results are anticipated to be presented in 2025 and are expected to have substantial value (46). This trial is designed to compare the use of single and multiple arterial grafts in an expected sample size of 4,300 patients.

In conclusion, there is sufficient evidence supporting the use of more than 1 arterial graft when performing coronary artery bypass grafting. In particular, the decision to perform MAG or TAG should depend on a consideration of the patient’s life expectancy, comorbidity, and surgeon’s skills.

Conflicts of Interest: Both authors have completed the ICMJE uniform disclosure form (available at http://dx.doi.org/10.21037/amj.2020.03.12). The series “Coronary Artery Bypass Grafting” was commissioned by the editorial office without any funding or sponsorship. The authors have no other conflicts of interest to declare.