Pulmonary tuberculosis with venous thromboembolism as an unusual presentation of occult pancreatic cancer: a case report

A 65-year-old gentleman with underlying diabetes mellitus, ischemic heart disease and smear positive PTB presented with shortness of breath and left lower limb swelling for 1-week duration. One month ago, patient was newly diagnosed with smear positive PTB with the presentation of chronic cough and loss of weight. His chest radiograph showed consolidation and cavitation in the right upper lobe (Figure 1) with positive sputum for acid fast bacilli (AFB). He was then commenced on standard anti-tuberculous medications. 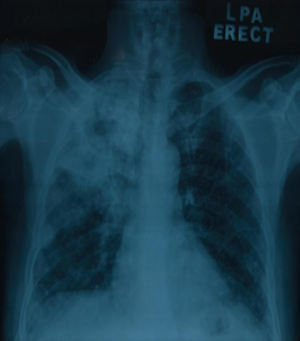 The past medical history included diabetes mellitus and ischemic heart disease. He had no history of smoking and did not drink alcohol. He was a retired general practitioner in a local clinic. His medications prior to the diagnosis included Mixtard insulin injection, bisoprolol and aspirin. There was no family history of malignancy, tuberculosis or hypercoagulable disorder.

Treatment for venous thromboembolism was initiated and he was commenced on Rivaroxaban. The anti-tuberculosis treatment was continued. Notable, he had no other risk factors for thromboembolism. Despite proper treatment with standard anti-tuberculous and adequate anticoagulation, he did not show good clinical improvement and continued to deteriorate. Subsequently, he developed ascites and bilateral pleural effusion while in the ward. Contrast-enhanced CT scan of thorax, abdomen and pelvis showed bilateral lungs consolidative and miliary changes with bilateral pleural effusion, and nodular peritoneal thickenings with gross ascites. 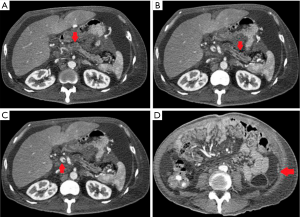 Figure 2 Contrast-enhanced CT in arterial phase revealed a lesion in the body of pancreas, measuring 1.9 cm (AP) × 2.9 cm (width) × 1.7 cm (height). Tail of pancreas is atrophied with ductal dilatation. Presence of portal vein thrombosis, peritoneal deposits and ascites. (A) An ill-defined lesion in the body of pancreas is suggestive of malignancy (arrow); (B) tail of pancreas is atrophy with dilatation of pancreatic duct (arrow); (C) filling defect in the proximal part of portal vein is suggestive of thrombus (arrow); (D) nodular thickening of the peritoneum consistent with peritoneal deposit (arrow). CT, computed tomography; AP, anteroposterior.

He was diagnosed with pancreatic malignancy after workup. However, biopsy was not proceeded after discussion with family members in view of general ill condition. Palliative care was offered. He succumbed to the illness eventually (Figure 3).

Figure 3 Timeline figure of events from initial presentation to end of life.

All procedures performed in studies involving human participants were in accordance with the ethical standards of the institutional and/or national research committee(s) and with the Helsinki Declaration (as revised in 2013). Written informed consent was obtained from the patient’s family member for publication of this case report and any accompanying images.

Pancreatic cancer is a tremendously lethal disease. It is characterized by aggressive progression and subtle in initial presentation which make the diagnosis challenging (1). In fact, majority of cases present in advanced state with either locally aggressive or metastatic disease. Multifactorial reasons have been identified. It includes the non-specific symptoms associated with the disease and close proximity of major blood vessels which can be easily invaded by the tumour. Although certain risk factors have been identified, the exact aetiologies of pancreatic cancer are still remained unknown. Numerous studies about occult malignancy in patients with idiopathic deep vein thrombosis have advocated pancreatic cancer among the most common causes identified (2). Several recent studies have shown that the incidence of venous thromboembolism is highest in patients presenting with metastatic cancer, particularly pancreatic cancer and carry poorer prognosis (3).

The relationship between thrombosis and cancer was initially introduced by Armand trousseau in 1865. Multiple form of thrombotic complications in malignancy have been found. It varies from arterial, venous thromboembolism to disseminated intravascular coagulation (4,5). It is well known that pancreatic cancer has a distinct ability to create a hypercoagulable state which subsequently may lead to clinically apparent thrombotic event. The risk factors that have been identified in cancer patients include surgery, immobility, certain comorbidities, tumour stage and histology, the presence of indwelling central venous catheters and chemotherapy (6). The pathophysiology of thromboembolic event in cancer patients is still remained unclear despite the long-recognised association between malignancy and thromboembolic event (7). However, new perceptions into the biological mechanisms responsible for hypercoagulability state in pancreatic cancer have been reported in the last decade, potentially uncover novel therapeutic options (8,9).

Pancreatic cancer expresses peculiarly high level of tissue factor in tumour tissue as well as release of tumour-derived microvesicles. This might lead to activation of extrinsic and intrinsic pathways, promoting platelet activation and adhesion, as well as release of neutrophil extracellular traps from leucocytes, and thus promoting distal thrombosis (10,11). Furthermore, other coagulation pathways probably contribute to these processes, such as those that involve heparinase (12), podoplanin (13,14) and hypofibrinolysis. On the other hand, pancreatic tumour cells and activated platelets can release plasminogen activator inhibitors-1 as a potent inhibitor of fibrinolysis (15,16). In addition to the cancer cell population, pancreatic cancer plays a pivotal role in dynamic milieu of cellular and acellular elements. It includes fibroinflammatory stroma, extracellular matrix and infiltrating immune cells. Thus, postulating that procoagulant character of the cancer cells itself together with the procoagulant properties of the microenvironment that eventually lead to hypercoagulable state in pancreatic cancer (17).

Although tuberculosis and cancer are very common diseases, there has been little attention to the mechanism and clinical implications of their co-existence. The association between tuberculosis and cancer has rarely been reported. Of note, malignancies and the designed therapies for their management seem to create the suitable environment for either the reactivation of a latent mycobacterial infection or, more rarely, for the acquisition of a primary mycobacterial infection. Immunosuppression, principally depression of the T-cell defense mechanisms, is proven to be associated with mycobacterial infections (21). In short, there is paucity of study and analysis regarding the mechanism of tuberculosis in pancreatic cancer. Its association with tuberculosis is a rare occurrence, and very few cases have been reported in literature. To our best knowledge, there was no previous review for the possible link between venous thromboembolism, tuberculosis and pancreatic cancer. Nevertheless, pancreatic cancer has a complex molecular landscape with high potential for future discovery.

The initial diagnosis of PTB in our case masked the diagnosis of pancreatic cancer, in which they shared some of the common constitutional symptoms. Diagnostic challenges arising from the multi-faceted and overlapping presentations of these two disorders. It is well known that the risk of tuberculosis increased in patients with malignant disorders, secondary to immune dysfunction. Thus, tuberculosis and malignancy may co-exist in some cases. The similarities in the clinical and radiological presentations between tuberculosis and malignancy might mislead initial diagnosis and intensify the complexity (22). The limitation in our case report was the biopsy test was not performed. The diagnosis was made based on the triphasic pancreatic protocol CT scan and extreme high titre of CA 19-9.

CA 19-9 was the most well studied and used tumour biomarker for assisting in diagnosis of pancreatic cancer. Furthermore, CEA is likely the second most frequently used biomarker for pancreatic cancer. Nevertheless, neither biomarker owns the clinical accuracy desirable for screening of asymptomatic populations (23). Therefore CA 19-9 and CEA are advisable to be used in conjunction with imaging modality for directing diagnostic as well as treatment decisions in patients with suspected pancreatic cancer.

Pancreatic cancer is one of the most lethal malignancies. Thus, its early detection is crucial. It highlights the need for being more vigilant and a high index of suspicion in patients with unusual or unexplained symptoms.

PTB with venous thromboembolism is a rare mode of presentation for occult pancreatic cancer. Utilisation of CA 19-9 and CEA in the clinically relevant context can be helpful in diagnosis of pancreatic cancer. Furthermore, clinicians need to be aware of the protean manifestations of tuberculosis and cancer thus maintain scepticism for simultaneous or misleading presentations. Further studies regarding cancer associated thrombosis with tuberculosis are warranted.

Reporting Checklist: The authors have completed the CARE reporting checklist. Available at http://dx.doi.org/10.21037/amj-20-114

Conflicts of Interest: All authors have completed the ICMJE uniform disclosure form (available at http://dx.doi.org/10.21037/amj-20-114). The authors have no conflicts of interest to declare.

Ethical Statement: The authors are accountable for all aspects of the work in ensuring that questions related to the accuracy or integrity of any part of the work are appropriately investigated and resolved. All procedures performed in studies involving human participants were in accordance with the ethical standards of the institutional and/or national research committee(s) and with the Helsinki Declaration (as revised in 2013). Written informed consent was obtained from the patient’s family member for publication of this case report and any accompanying images.